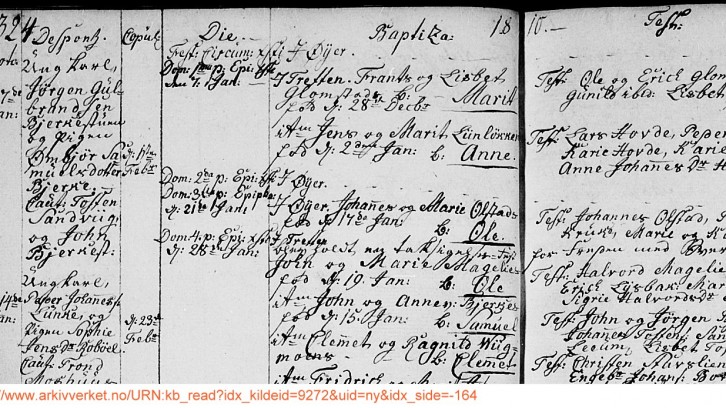 Why was my great-grandfather named Ole? The question sounds downright silly at first blush, since it seems like about half of all males in Norway had that name. Indeed, among Kari Larsdatter’s relations and in-laws, there are enough Ole’s to make for a lot of confusion. Her eldest son (more about him later), her husband (not the boy’s father), and her son-in-law, are all named Ole. And the proportion overall certainly is very high. I started with 1840 and tallied the first 100 boys christened in Sør-Fron: 16 out of 100 were named Ole. So what’s to question?

Well, the naming of children in Norway followed rather strict customs back then; not  100% of the time, of course, but in rural areas, not far from it. Here is an explanation of the tradition, again from the invaluable Digitalarkivet :

… Speaking of names, your search might benefit from a unique Norwegian custom. In Norway, especially in the rural districts, there have long been very strict rules about naming descendants. Some of these rules persist even today. It was customary, for example, for the eldest son to be named after his paternal grandfather and the second son after his maternal grandfather. In a similar fashion, the eldest and second daughters were named after the respective grandmothers.

After the grandparents’ names had been used, the great-grandparents’ names were the next to be given, although without strict rules as to the order. Special circumstances might interfere with these rules. For example, the name of a deceased spouse was to be used first; and the name of the father or mother was given if the child was baptized after a parent’s death.

Based on this tradition, one would expect to find one or more Ole’s among the male ancestors of our great grandfather. But, as you can see in Ole’s pedigree, there is not a single Ole among his two grandfathers and two known great-grandfathers.

Ole was the second son, and his maternal grandfather’s name was Lars. So was his father’s, which may have triggered an exception, but that is doubtful. Secondly, he might well have been named Poul, after his paternal grandfather, since the first son Poul had died several years earlier.  This type of “recycling” was quite common. But barring that, there were still Svend, David, Peder, and Johannes to choose from. Since it was very un-customary to choose a name based only on the parents’ whim (as is often the case today), there must be a story behind this.

While we are on the subject, Kari Larsdatter’s son Ole, christened in 1855,  raises similar issues. Since the baby was “illegitimate,” it is understandable that he was not named for his paternal grandfather, Knut. I think we can safely assume that Kari had not met her future husband Ole Pedersen Nesseth of Gausdal parish; she didn’t move to Gausdal and marry him until seven years later.

Why was the baby not named after some male ancestor of his mother?  “Lars” would have been logical;  Lars was not only the name of this boy’s maternal grandfather, but also the name of Kari’s maternal grandfather.  Incidentally, Lars Poulsen had died just 10 months before this Ole was born, which would seem to make “Lars” even more appropriate. Another choice might have been Poul. Did Kari name him Ole after her 14-year-old brother? That doesn’t seem likely. Or is there some “Ole” in the life of the Lars Poulsen family, or even two Ole’s, related or not, that we don’t know about?

Back to the earlier Ole, Ole Larson: here’s a dark, hugely unlikely, but fictionally intriguing scenario: Suppose that then, as today, babies were occasionally named out of gratitude for some benefactor of the family.  The sentencing document that sent Anne Larsdatter to prison for thievery (of food) says she acted in cooperation with “two other persons” who were tried in a lower court. While the printed version of that document as posted on the site does not name the other persons, the handwritten version does; one of them is Ole Engebretsen. And just suppose that besides being responsible in a way for Anne’s imprisonment, Ole Engebretsen was also responsible for saving her family from starvation. Wouldn’t it be ironic if Anne named her prison-born baby after him?