I guess it is rather un-blog-like, but this series is best read sequentially. So, if you have not read the first installment, please click Part I: Thunder Hawk.

Lillian Myers was a tiny woman, well under five feet tall, whose weight even in her prime never reached 100 pounds. 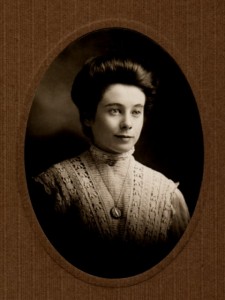 In addition, her health was unstable, and one can imagine that giving birth must have been an ordeal for her, even under the best of circumstances. Nevertheless, by 1917 Dan and Lillian boasted four little ones. Clockwise from top (oldest to youngest): Bernard, Helen, Reatha, Velma. 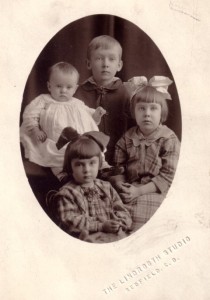 In 1919, the birthing of their fifth child was especially critical. The baby was very large, and complications ensued. The midwife believed that Lillian would not survive it. She told Dan that if he knew any prayers, he had better say them. Dan the skeptic got down on his knees, the story goes, and promised his life in the service of God, if only the lives of his wife and baby were spared.

Mother and baby Esther did survive, and Dan was true to his word. He sold the store and moved with his family to Zion, Illinois, a Chicago suburb which, as its name implies, was an important center of the Pentecostal revivalist movement. 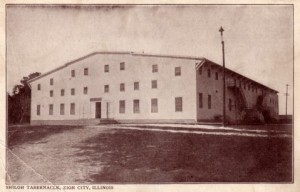 In Zion, Dan trained for the ministry. It was not a formal, seminary-type education, involving no diploma nor ordination. As best I can ascertain, it was more like “on-the-job” training, preaching and working in places like the temple pictured above, and at storefront missions on Chicago’s Skid Row. My mother recalled singing and worshiping with him at these inner-city revivals.

After two or three years in Zion, Dan the preacher was ready to hit the road.