For more than two decades, Dan Myers the preacher traveled the length and breadth of Montana, venturing as far west as Ontario, Oregon, and east across the Dakotas. Apparently he felt a special calling to minister to Native Americans, possibly because of the years he spent in Thunder Hawk. Some of his “ports of call” included the Absarokee mountains of western Montana, and St. Xavier, on the Crow reservation southeast of Billings.

Lillian and their five girls traveled along, seldom spending  two school years in one place, while the eldest child, Bernard, stayed behind and went to boarding schools. Apparently Dan considered education more important for a male child, a prevailing attitude in the early 20th century.

Dan must have cut quite a figure as a preacher, with his commanding stature, his booming voice, and his ability to play a variety of musical instruments “by ear,” with no formal training. 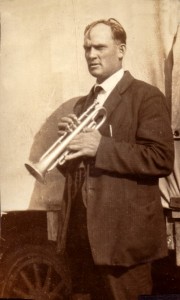 Like many Pentecostals, Dan held some pretty strong and sometimes unorthodox opinions. He never took up a collection at his meetings, instead relying on odd jobs and personal gifts from his “converts” to sustain his family. Apparently his voice came in handy for other things besides preaching and singing, as for a time he hired himself out as an auctioneer. 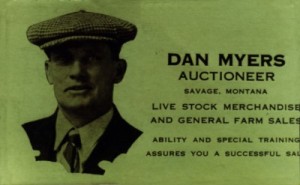 Most of his time was spent setting up and holding revival meetings, either in rented buildings, or in the huge tent he carried along. 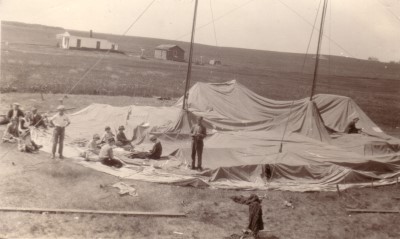 In the winter, Dan earned a little money hauling coal in his modified Model-T truck, which in summer served as the family’s “mobile home.” 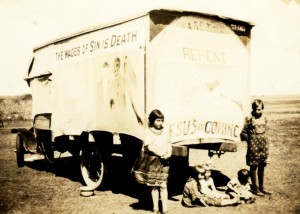 Standing on the left is my mother, Reatha, on the right her older sister Helen; seated between them are Velma, Esther, and the youngest daughter, Leah, born in 1921. Leah suffered from mental retardation, and possibly physical problems as well. She was placed in an institution as a teenager, and died there while in her twenties.

Note here the family’s sanitary facilities, located behind the left rear wheel of the truck. That brings me to a pet subject of mine: poverty.

Next: Poor as Church Mice.