In the 1920’s and 30’s, my grandfather was a preacher of some renown in the Pentecostal movement. His name comes up repeatedly in the book Northern Harvest: Pentecostalism in North Dakota by Darrin J. Rodgers, published in 2003 by North Dakota District Council, Assemblies of God.

Ironically, some of  Grandpa’s  key teachings helped to prevent any lasting memory of him in the many communities he served, and also precluded any prosperity or even financial stability for him and his family. According to Rodgers, “Myers … taught the Pentecostals that they should not organize a church, erect a building, or affiliate with a denomination.” Consequently, what little conceptual structure came along with the preacher, his words, and his tent, vanished as soon as they moved on. Combined with his practice of never collecting an offering, this added up to a life of perpetual poverty for the Myers family. Here is a typical snapshot of the five girls outside one of their winter dwellings. 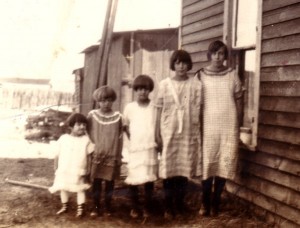 My mother related that during the long periods on the road in their “Gospel truck” (see previous post), each child was allowed to possess, including her clothing, only as many items as would fit into an apple crate. Another anecdote dealt with suppers of macaroni with salt and a little butter, and nothing else.  If a follower would gift them a dozen eggs or a bunch of turnips, it was cause for rejoicing.

It is no exaggeration to say that the Great Depression began years earlier for the Myers family than for the rest of the world. Perhaps the upside was that they were already accustomed to the poverty that gripped the entire Midwest during the following decade.

But the stresses that nearly broke the family apart came less from Grandpa’s poverty, than from his extremely restrictive attitudes toward most forms of social interaction.