While Pentecostalism is most noted for the uninhibited behavior of its worshipers (shouting, ecstatic waving and body movements, speaking in tongues, etc.), an equally important feature of most Pentecostals is their severe disapproval of any behavior deemed sinful (in this they differ very little from some other, non-Pentecostal Protestants). Depending on the leaders’ attitudes, this can include just about everything except certain kinds of work and worship. Of course, alcohol and tobacco were strictly forbidden. In fact, the  influence of these groups in bringing about Prohibition was considerable.

But many Pentecostals went much further. Just a few of the things they (including Dan Myers), and again to be fair, some other Protestants, considered sinful were card games (whether or not gambling was involved), social dancing, motion pictures, popular music, stage entertainment of any kind, short skirts and short hair for women, makeup, jewelry … the list goes on and on.

As the Myers girls approached their teen years, the stage was set for intense conflicts. On one hand, the proscriptions of their faith; on the other, popular culture and peer pressure (not to mention awakening hormones) tore at the young people from every side.

When Reatha had earned her first few dollars as a baby-sitter, she bought herself a simple wristwatch. Her father considered this a frivolous waste, and on the pretense of fairness (since the other girls could not also have one), required her to return it to the store. Tensions escalated when she reached dating age.  At least once, she was punished for attending a movie in the company of a male friend (not necessarily the one below). 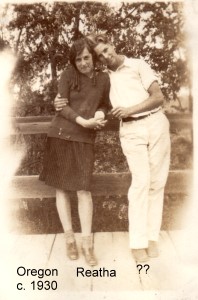 The final straw apparently came when Reatha got her hair cut and styled in a modern fashion. Dan informed her that she was no longer welcome to help him lead the singing at his services, which she had been doing for most of her life. He went so far as to rebuke her before the congregation. Whether under duress or by her own volition, Reatha left the home, finding work as a domestic at the farm of Walter Hart in the North Dakota borderlands outside Sidney, Montana. The Hart’s allowed her to board in Sidney to complete high school, and she graduated in 1933 at age 19. Her sister Helen graduated the same year at the age of 21.

Nearby to the Hart farm was that of widower Isaac Larson and his five boys.  Reatha eloped with Lovell Larson in late 1934, and they moved to Washington state, where their first child, my sister Darlene, was born in 1935. Relations between Reatha and her father were still strained, but Lovell was adamant that their daughter not be deprived of contact with her grandparents, nor they with her.