With one-year-old Darlene, Reatha traveled by train to see Dan and Lillian in Savage, Montana, where they lived at the time. Esther and Leah were still living at home.  On the left, Reatha, Darlene, Esther and Leah. On the right, Dan, Lillian, Helen and her husband Frank Sparks, Esther, Darlene, and Leah. Velma, whose falling-out with her parents was more severe than Reatha’s, had moved away, and never reestablished contact with them. 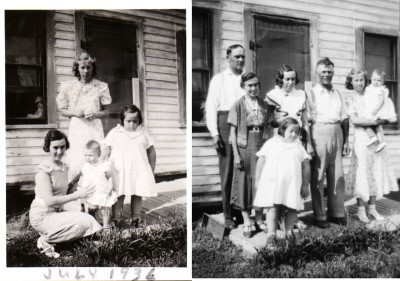 A year or two later, when Lovell had earned an annual summer vacation from his job at the mills, they all took the first of many, many summer road trips to visit family in Montana and North Dakota.

The arrival of Darlene must have been the catalyst for a deep and permanent reconciliation between Reatha and Dan. Despite their differences, we all enjoyed cordial relations and frequent visits back and forth. When I was born in 1947, Grandma came to Longview to help out. At some time during my infancy, they both came to visit. 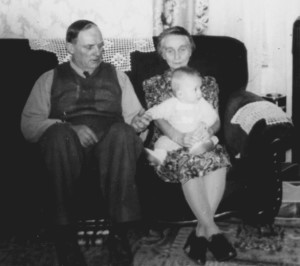 Grandma also came to help when I was five and Bonnie was born. All my memories of Dan center around our nearly annual visits to Park City, Montana (near Billings), where Grandpa had retired and lived on a small plot near the center of the tiny town. There he raised a vegetable garden, a few sheep, pigeons, and honeybees. 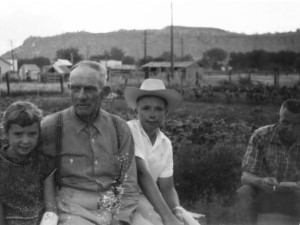 Bonnie, Dan, George, Lovell, 1960. For his part, Dan learned to tolerate such objectionable habits as my dad’s smoking. I remember him as kind and patient, if somewhat severe. I remember especially his mealtime prayers as being loud and long.

Dan Myers died in 1965, and Lillian came to Longview, where she lived in a small apartment until her death in 1979. Consequently, I remember her more clearly. Most outstanding to me were her pleasant, unassuming disposition, quiet voice, ready smile, and shy, chuckling laugh. 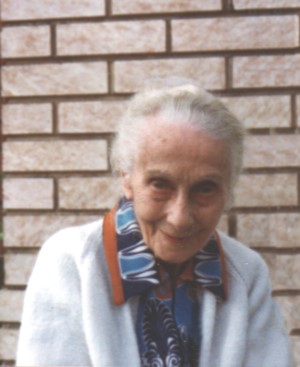