“Grandpa Larson,” as I always called him, was born on his father Ole’s dairy farm in Vernon County, Wisconsin. He was the last of six children born to Ole and his first wife, Anne Samuelsdatter. Anne died soon after, and Ole married Helena Olsdatter, who had a daughter the same age as Isaac. Ole and Helena eventually had six more children together (see “Ole’sChildren“). Pictured below are Isaac and two of his elder siblings. The eldest brother, Smith Larson, not pictured,was probably living on his own by this time, while the other two siblings died in their infancy. 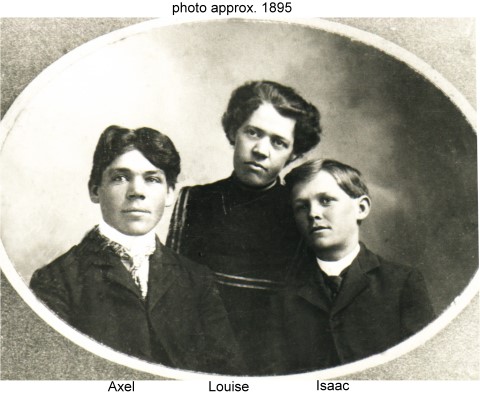 Family lore had it that relations were strained between Isaac and his stepmother and/or his stepsister. Of course Grandpa never mentioned anything like that himself, nor indeed anything at all about his early life. But if true, it might help explain why he never remarried after his own wife died in her 30’s, choosing instead to raise five young sons alone on the farm. That can’t have been easy.

Fast-forward to the year 1909, when 25-year-old Isaac set out with three of his brothers to claim homesteads on the western edge of North Dakota, about 25 miles southeast of Sidney, Montana. It was very late in the homesteading period, and the available land was marginal at best. Only a long spell of unusually favorable weather enabled any of the homesteaders succeed even briefly. The eldest brother, Smith Larson, “proved up” his claim, but apparently soon sold or ceded the land to the others. Smith was a merchant sailor, and died a bachelor in 1923.

The other three brothers, Axel, Isaac, and Oscar, stayed on to raise their families. In this, they were in the minority. Most of the homesteaders had given up even before the Depression and Dust Bowl years of the 1930’s. Today, nearly all of the area is a National Grassland, owned and administered by the federal government.

The image below is of Oscar, Isaac, and Axel, in front of one of the first dwellings they built on their claims. Imagine spending a North Dakota winter in a shack like this! 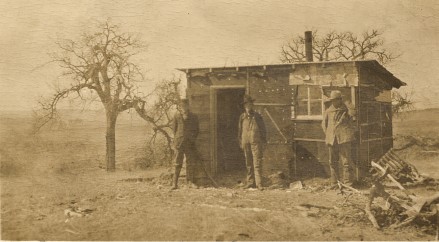 If the dwelling appears uninviting, the land around it looks downright forbidding. As early as the Lewis and Clark expedition, explorers remarked on the radical change in the landscape as soon as they crossed the Missouri River, which  separates the eastern and western halves, approximately, of the two Dakotas. On the eastern side, grass was tall and lush, nourished by plentiful rainfall and favorable soils. To the west, the grass was short and sparse, the land much drier, and the prairie interrupted by badlands — arid hills of colorful, wind-eroded soil where nothing at all will grow. 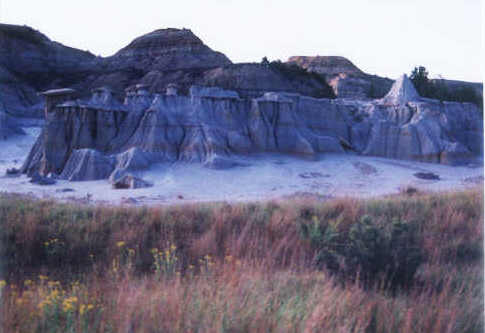 Of all our relatives, one cousin, Ron Whited (grandson of Axel Larson), still lives and ranches in the area, holding parts of the original homesteads, and leasing grazing rights on federal and private lands. Ron and his wife earn a modest living raising high-quality beef cattle on more than 12,000 acres of (mostly leased) land. Compare that to the homesteaders who expected to make a family livelihood on their claims of 160 acres!

Another cousin, Larry Larson, tells of his father Oscar returning home from a day trip to Sidney in the 1940’s  to find that a massive swarm of grasshoppers had not only decimated his crops, but had even eaten the paint from their house! Within days, Oscar moved his family to town and gave up farming for good. By this time, Isaac had moved to Washington, where his two eldest sons had established themselves and were raising families of their own.

Next: Ike and the boys.