(Grandpa Larson used the nickname, “Ike,” although I seldom heard it, as he was just “Pa” or “Grandpa” within the immediate family.) After establishing the homestead, Ike returned to Wisconsin to marry Anna Moen on 10 January 1912, and brought her to the new place. 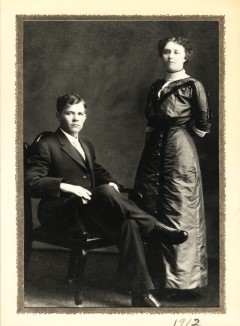 Besides the years of favorable weather, Isaac’s skill with horses probably contributed to his farming success.

In 1926, the Larson farm experienced its first crop failure (see Letter From Anna). By then, Anna’s health was already deteriorating, as also indicated in the letter.  Isaac traveled to Washington State, and located a farm for sale near Seattle. He did not buy that farm, perhaps due to lack of cash, but did make the decision to move west. Upon his return to North Dakota, the family began selling their horses and other possessions, in preparation for the move.

Unfortunately, Anna’s health went downhill rapidly; she died in the summer of 1927, and the move was not accomplished.  Grandpa and the five boys stayed put on the old homestead. You may be familiar with the popular radio show “A Prairie Home Companion.”  Its host, humorist Garrison Keillor, often refers to a favorite stereotype, the “Norwegian bachelor farmer.” Just take that stereotype, multiply by six, and you have my father’s childhood.

Isaac may have continued to entertain the notion of moving to Washington. In the fall of 1929, Waldemar enrolled in Pacific Lutheran Academy,  now known as Pacific Lutheran University, in Parkland, WA (now a part of Tacoma). Parkland is also the location of the farm for sale mentioned in Anna’s letter of three years earlier.

Waldemar left Pacific Lutheran after only one semester, for reasons unknown; possibly related to the Great Depression,  which began with the stock market crash just weeks after he enrolled. Grandpa and the boys remained on the farm through the  1930’s, despite repeated droughts and crop failures which exacerbated the nationwide economic distress. Waldemar and Lovell both married in the mid-30’s and moved to Washington on their own, while Grandpa stayed on the farm until the younger three boys had all graduated high school, the last of them in 1940.