I have finally coaxed some key details from the handwritten version of Anne Larsdatter’s sentence by the Høyesterret (Supreme Court). “Tusen Takk” (a thousand thanks) to Else Rustad of the Norwegian Genealogical Society for transcribing portions of the document into emailable Norwegian, and to Berit Carlsen of Bend for translating. It was no easy task, as you can see from this excerpt: 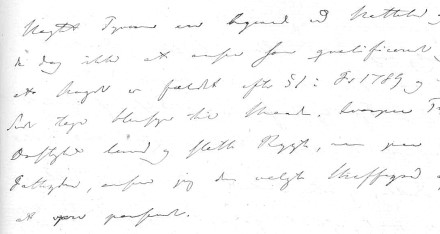 Below is a complete list of the items Anne was convicted of stealing, in cooperation with two other persons, Kari Olsdatter and Ole Engebretsen:

approximately 4-5 gallons of potatoes
some butter and flour
some cured herring
a bottle(?)
“a few items of clothing”
some linen thread

All the stolen items had been returned, or compensation made or in a few instances waived. Seems like pretty “small potatoes” :-)> to warrant an 8-month prison sentence from the Supreme Court.

Some other interesting details: Anne was ordered to pay the fee of  “Advocat” Andressen (apparently her defense attorney). The argument had been made that the other two persons should also have been imprisoned. The presiding judge wrote that there was merit to that argument, but also contrary factors,  and declined to lessen the punishment of the accused. I had assumed that the other thieves had simply been convicted in lower court and punished, but it does not appear so from this reading.

The judge commented on the accused’s “boldness” and “bad reputation,”(?) but cited as a mitigating factor her poverty(!) Altogether, four judges signed off on the sentence, one of whom explicitly stated that the two accomplices should have been brought in.

I will revise the existing web page on the sentence with a brief summary of these details.