Uncle Ivan sent me this picture: 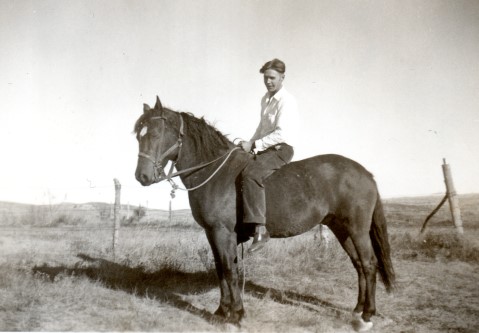 Inscription on the back says “Thanksgiving 1939.” So, my dad was 25 years old, and apparently at the homestead on vacation. In his letter, Ivan told me all about that particular horse. Quite a good story.

Lovell bought or traded this horse from his cousin, Harvey Larson. By coincidence, the horse already had its name before cousin Harvey bought it. Dad got it prior to his moving away in 1934-35, but it stayed at Grandpa’s afterward. I’m pretty sure Lovell never had any horses in Washington.

Harvey was a fast, high-spirited horse, and very smart. One of his favorite tricks was somehow slipping out of his bridle while tied up. One evening, Lovell had ridden Harvey to a ranch 4-5 miles away to visit Reatha. After dark, the horse showed up at home, alone.

Fearing there had been an accident, Isaac sent Uncle Ivan on a work horse  to a neighbor about one mile away for help. Before Ivan reached the neighbor’s, Lovell caught up with him, riding Harvey. Lovell had returned on foot after Harvey rubbed off his bridle and made his own beeline for home.

On another occasion, Harvey got out of his bridle while tied up in the corral. As he escaped into the pasture, the boys started yelling at him. As if to make up for his offense, Harvey circled the pasture, herding all the milk cows toward the barn. It was hours before milking time, but maybe Harvey thought that doing the boys this favor would put him back in their good graces.  Like Ivan said, pretty smart horse.

After studying that photo, I am sure it is the same horse pictured below with Isaac and a girl about four years old (which Darlene would have been in 1939). Darlene says it isn’t her, and I have to agree the likeness is not perfect. 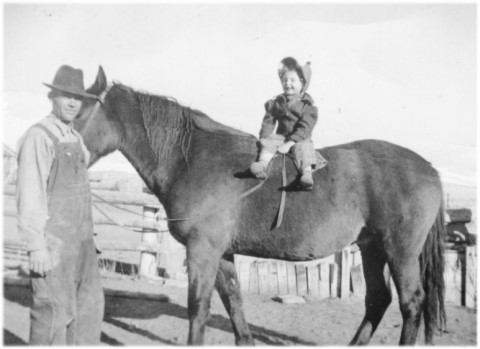 So, if it isn’t Darlene, then who? And, isn’t that wacky outfit just the kind of thing my Mom loved to dress her kids up in? One more time, tusen takk to Uncle I for the  top picture and fine stories.