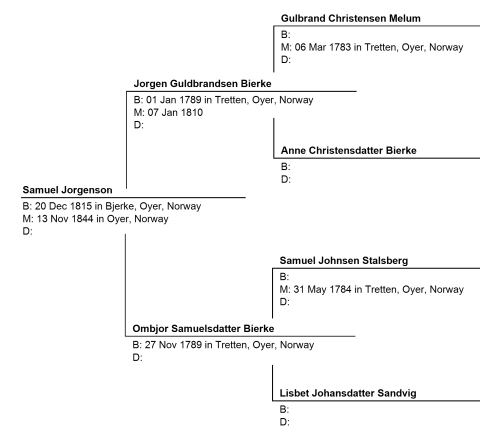 The rest of this post may be a little technical, and if you’ve come here at all (*there are ^&$% few of you lately) you may want to bail now.

We left off with the christening of Samuel Jorgensen of Bierke farm in Tretten congregation, Øyer parish. Samuel (my great-great grandfather, and same for all grandchildren of Isaac, Axel, and Louise Larson), was baptized on 26 Dec. 1815. There are only his parents’ first names, Jorgen and Ømbjør. Beginning with the year 1815, and working our way back page by page to 1810 in the Øyer Ministerialbok 1784-1824. 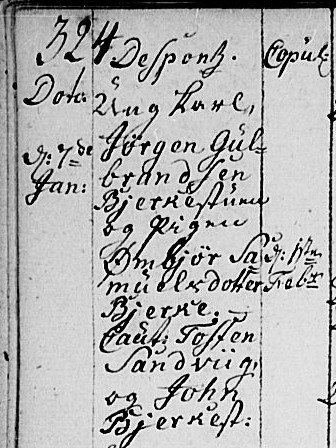 Year 1810, date 7 January. [Bachelor] Jorgen Gulbrandsen Bjerkestunn (? – must be some variant of Bjerke; “tun” means “farmyard”) and [girl] Ømbjør Samuelsdatter Bjerke. Witnesses include Tosten Sandvig. Now we have surnames for Samuel’s parents. Not their ages, but FamilySearch will hunt for their births, between 20-30 years prior to 1810. Fortunately, the Øyer churchbooks are not cut off at 1800, as they are for Fron parish.

In the same churchbook as above, I found them both.

Year 1789, parents are Samuel and Lisbet [of] Bierke, date 27th Nov, baby: Ømbjør. Once again, witnesses include a Sandvig and a Glomstad. Well, it’s back to paging through the films without benefit of an index, looking for the marriages of two sets of parents, using only first name and farm name, and a one-ended window for marriage date. It looks like Jorgen’s parents do have a Bjerke connection; this must be them: 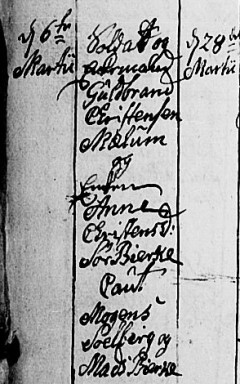 Witnesses: Mogens Soelberg and Mads Bierke. Second date (Ceremony?) 28th March. Unfortunately, no age of bride and bridegroom here. Luckily a friend at the DIS-Norge chatroom led me to another search engine (with English support, even) at Arkivnett Oppland. Their index only includes a few of the Øyer parish books (and none for Fron parish), but the period I’m working on is there, and there’s a lot more to look for in it. I haven’t tried it out yet, but will report back.

Meanwhile I found two possibilities for Ømbjør Samuelsdatter’s parents. Problem is, Bierke farm is not mentioned for any parties, including witnesses, to either marriage. Here they both are: 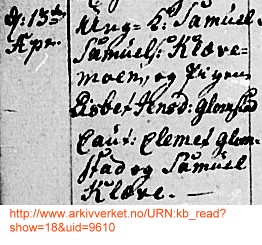 No mention of Bierke here, but note that there was a witness named Glomstad at Ømbjør’s christening. However, the record below has another connection. 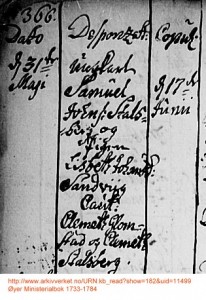 Year 1784, date 31 May. [Bachelor] Samuel Johnsen Stalsberg and [girl] Lisbet Johansdatter Sandvig. Remember Sandvig? That was the farm name for several witnesses in above records.

Witnesses are Clemet Glomstad (!! same witness as in previous record!!) and Clemet Stalsberg. To sort out this problem, I turned to the Census of 1801.

Unlike Skurdal, Sør-Fron, there was only one Bjerke, Øyer in the census. And eureka – There I found both Ømbjør Samuelsdatter and Jorgen Samuelsen, and their entire families! Excerpts:

So, Samuel Johnsen is the one. He has a different wife (Lisbet Johanesdatter must have died in the 12 years since Ømbjør was born). Of more interest: Samuel is also a “Huusbonde,” which I think means an owner, or at least “boss” or long-term lessee on the land.  Samuel is one of two “Huusbonder” on this farm. Gulbrand Kristensen, on the other hand, is one of two “Huusmen,” a familiar term to regular readers of this blog. For simplicity, I sometimes just say, “peasant.” Gulbrand’s marriage record lists him as a soldier and  and a widower when he married Anne Christensdatter (!) in 1783. His residence then was listed as Melum.

Now we have solid info – Names, ages, and residences, for not only Samuel Jorgensen’s parents and grandparents, but his parents’ siblings as well! Furthermore, with the Øyer churchbooks intact back to the 1600’s, There are good prospects of getting back another two or more generations. Stay tuned!