When I got back to around 1750, the amount of info thinned out badly. Samuel Johnsen’s christening (Samuel Jorgensen’s maternal grandfather):

Year 1744. Date is given by the Sunday of the church year. FamilySearch.org index says it is 9 Feb. Father: Jon Stalsberg, no patronym. No mother’s name at all. Other christening records are equally uninformative. “Faddere” are the witnesses. Table from Arkivnett Oppland.  Note: Arkivnett Oppland searches ONLY by given name and farm name. Searching by “fathername/ family name” is an option but seems to be broken as of 03-16-09. Recheck later.

Year 1746, 9 Oct. (18th Sun. after Trinity). I have tried Arkivnett Oppland for several names, but this is the only other one I have hit so far. Their transcription:

Two of these witnesses link to above record: Madme. Wielsgaard (perfect match), and Marie Lunche (same farm name, I’m still thinking it must be Lunde?)

Info is getting mighty sparse, but I found the marriage of one man named Christen that could be the right one.  The connection: one of the witnesses is from Melum (and is also a Pedersen, same as bridegroom). 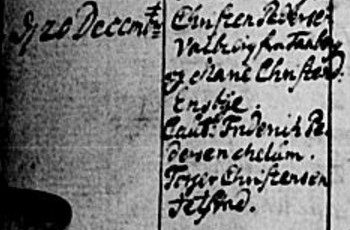 Christen’s two farm names,Valberg and Taaberg, are both near Trondheim, very far from Øyer. At least I could not locate any other farms by those names. Such long distances (in 1740) would normally be traveled only by someone like a soldier. Perhaps Christen was a soldier, as we know that his son Gulbrand was (from Gulbrand’s marriage record). Marie’s farm, Ensbye, is in Øyer parish, about 20 miles south of Tretten.

This advances us back 🙂 another generation, to a time over 250 years ago. In Europe, Johann Sebastian Bach was still writing music. In the New world, England, Spain, France, and others were still quarreling over colonial territory, without even a hint of their eventual struggle for independence. I will take a break now and update the graphics on the static pages of the site.