Some enticing, but quite shaky, information on Helene’s immigration, and that of the first two Slettens. I found what may be their names on a ship’s passenger list, and two of them on Oslo police emigration documents. Let’s start with their departure from Oslo. Here are excerpts from the police records.

In Gunder sletten’s citizenship document, he states that he departed Norway on June 3, 1881, on the ship Angelo, so this must be him, 99% certain. Helena’s age is correct, as is her “occupation” (single woman). She may well have moved from Gausdal parish to Oslo (“Kristiania”) for a time before emigrating, and so stated that as her “domicile.” I’d give this an 85% confidence rating for being “our” Helena. Note also that their stated destinations are both in Wisconsin.

Next let’s speculate on the timeframe. From Oslo to Hull, England (the route of the Angelo) is just over 600 miles. On a steamship of the time, in those sheltered waters, that would take about two days. Immigrant ships from England to America generally departed from Liverpool, about 150 miles by rail across the island from Hull. Oslo-Hull-Liverpool-America was a very common route for Nordic immigrants of this period. Steamships from Liverpool reached the US eastern seaboard in 10-12 days.

Gunder Olsen Sletten must have arrived in Hull about June 5. Given another day for rail travel plus a half-day to make connections at each end, he would have been ready to leave Liverpool around June 7-8. Helena Olsdatter (if she departed Oslo as planned) was about two weeks ahead of him, but connections are not what they are today.

Consider now the SS Lord Clive, of the American Line. She arrived in Philadelphia on June 19 or 20; the manifest was signed on June 21. Gunder stated (more than 20 years later) that he arrived on June 16, but that would have been virtually impossible given the timeframe postulated above. Besides, no immigrant ship arrived in Philly on June 16, 17, or 18. Given a crossing time of 10-12 days, the Lord Clive must have left Liverpool about June 9-11.

If you have swallowed my assumptions so far, clear your throat; there are some bigger ones coming. Here is page 43 of the passenger list: 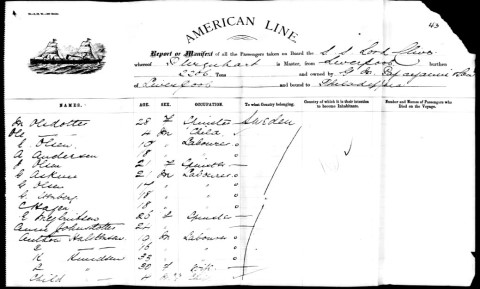 The first glaring problem is that everyone on the page is listed as from “Sweden.” To reconcile this, we must assume that the ship’s purser or clerk was so busy or careless as to conflate the nationals of two countries with similar surnames, languages, and appearance. Not implausible. The second is spinster Olsdatter’s first initial: “M,” not “H.” That still could be attributed to haste or shoddy work.

Third (and perhaps worst) is the child (presumably hers) listed after Ms. Olsdatter: a 4-year-old boy, Ole. Now, according to cousin Aline, Helena did have a child prior to Alma Larson, but it was a girl named Kari (Hanson), not a boy named Ole. But there are no dates of birth, death, or anything else about Kari  in the book “Larsons and Slettens.” Cousin Mary sent me some further anecdotes about this in an email yesterday, but the details are very vague. This may be hard to trace; stay tuned.

All these counter-indications may add up to a strike-out, but I will not be completely dissuaded until some counter-evidence comes to light. Continuing with the passenger list: the next name after the child Ole is “E. Olsen,” approximately the age of Engebret Olsen Sletten; three names later is “G. Olsen,” precisely the age of Gunder Olsen Sletten. These are cause for a certain amount of confidence for the Slettens, but what about Helene? Family lore has it that she was “on the same boat” with “the Slettens.”

Who ARE these people?, part 1
Call Off the Hounds