Everything I know about my great-uncle Smith Larson will fit in two very short posts.

He was born 14 April 1876, the second (surviving) child of Ole Larson and Anne Samuelsdatter. His elder sister Louise (Aunt Lucy) was very fond of him. 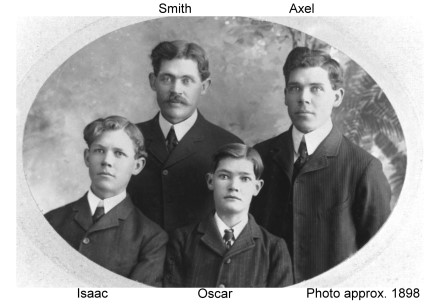 He was an amateur photographer, taking up the hobby in the early days of the Brownie camera (190-something). He claimed a North Dakota homestead in 1909, along with the three other brothers pictured above. The “famous” photo below, of the first homestead shack, *may* have been taken by Smith. 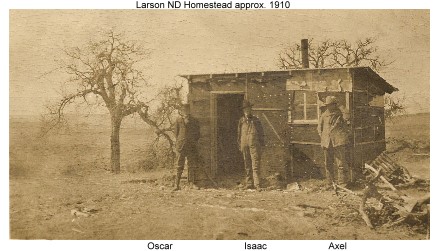 It is not clear how much time, if any, Smith spent on the homestead after “proving up.” According to cousin Larry Larson, Isaac’s home, where he raised his five sons including my father, was located on Smith’s original claim. Smith never married, had no children, and died on 22 January, 1922, age 45. Cousin Aline published this portrait of Smith in her book, “Larsons and Slettens 1985.” Please pardon the poor reproduction. 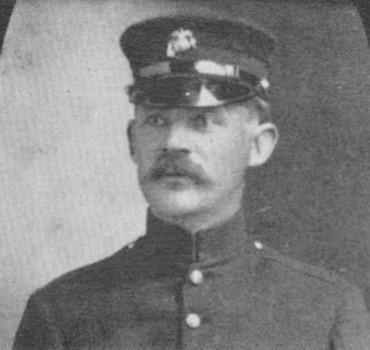 As a caption, there is only his name, birth and death dates, and “Merchant Marines.” But look closely at the insignia on his uniform cap, and stay tuned for the next episode. It will contain the few tantalizing facts I learned on my Wisconsin trip a month ago, and hopefully lead to future discoveries.