I just received an email from cousin Clarice that corrects some misconceptions I had about her father, Great-uncle Olaf Larson. At the log cabin described in an earlier post, he was not *only* working for others (which he did do from time to time), but farming the land he rented along with the cabin, where he owned the equipment, farm animals, etc. Clarice continues,

When we lived in Norwegian Valley, he was renting the farm there.  It was bought at the end of the Depression by someone else shortly after Clarence and Polly lost the Larson homestead.  We then rented a farm on Irish Ridge next to the farm my Uncle Otto Sletten was renting and about the same distance from the farm my grandfather, Gunder Sletten, owned with his youngest son Gilbert.

Clarice’s mother died when she was only three, so like Isaac’s family, Olaf’s was raised by a single father, with some help from relatives. Later on,

When I was in sixth grade we moved to a farm between Ontario and LaFarge in a little community called Rockton where I finished grade school and went to high school in LaFarge.  My father then had a farm auction and sold his animals and machinery and went to Washington State to work.

Clarice also corrected another error in my narrative on the Brush Creek Cemetery. Smith Larson was *not* the only child of Ole Larson buried there. I knew that – duh – as I had photographed Uncle Olaf’s gravestone, and that of Alma Larson Raiten. And there may be others that I overlooked. 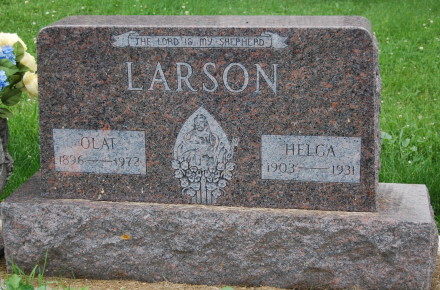 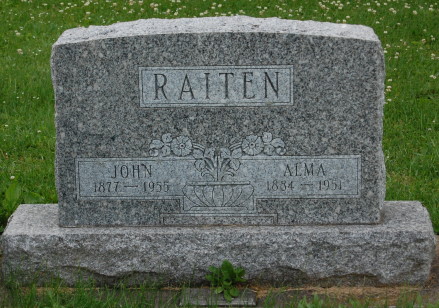 Many thanks, Clarice, for the corrections and clarification. We have also begun a lively discussion about Smith Larson’s military service. More on that in a later post.