The inscription on Smith Larson’s gravestone at Brush Creek Cemetery reads: “Pvt. Smith Larson, 18th Co. 5th Reg., U.S.M.C. 1877-1922. The only artwork on the stone is a copper relief of the U.S. Marine Corps insignia, the same as seen on Smith’s uniform cap. At the base of the stone is a metal recepticle that holds a small U.S. flag on a wooden pole (about which more in a moment). 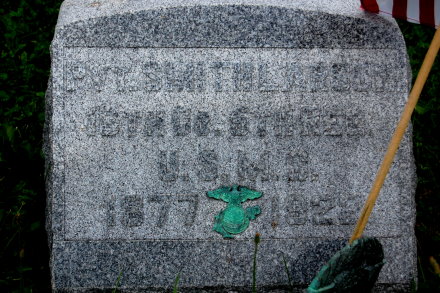 So far, I have uncovered no details of Smith’s military service, and precious little else about his life. He was about 21 years old (prime military age) at the beginning of the Spanish-American war, making it seem likely that he served in that conflict, in which the Marines played key roles.

However, I learned that the 5th division was only first formed in 1917, as the US prepared to enter World War I. In fact, the “Fighting 5th,” as they were nicknamed, earned great fame and many awards on the battlefields of France. The interesting thing about that is, Smith Larson was over 40 years old by then. Indeed, there is an error on his gravestone; he was born not in 1877, but 14 April 1876. Could it be that he was eager to enlist (or re-enlist), but there was an age limit of 40, making it necessary to fib?

After comparing Smith’s uniform in the previous post with other pictures on the Internet, I am sure it is from WWI, not earlier. The one and only other detail of Smith’s life that I have heard so far is, that he lost a leg with gangrene (or “blood poisoning”) at some point before his death. I am extremely curious whether that had something to do with the “Great War.”

The rest of his story may be lost forever, but I haven’t given up yet. I have several letters and other inquiries out, but I don’t expect any responses for a while.The cloth flag and wooden pole at Smith’s grave doesn’t look like it has weathered even one Wisconsin winter, so someone must be tending it. If anyone reading this has any clues, or even wild ideas, please chime in!