Here is a mystery photo that Orrin Moen gave to cousin Lois at the recent Moen-Hovde reunion.

Orrin suggested to Lois that the house, at least, might be Ole Larson’s, and therefore, the people might also be Larsons. Orrin did not recognize any of them, and neither can Lois or I. It is certainly not Ole Larson’s family.

Although of the same general shape as both Ole’s house in Wisconsin *and* Isaac’s in ND, I’m pretty sure it is neither one. The main part of the house (on the right) appears larger. I don’t think there would be room for the two upstairs windows in either of the Larson houses. 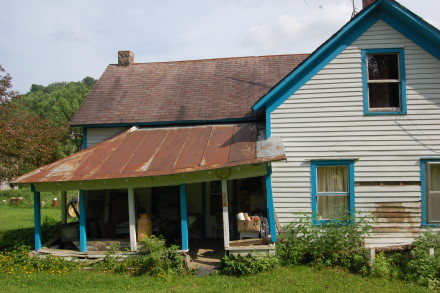 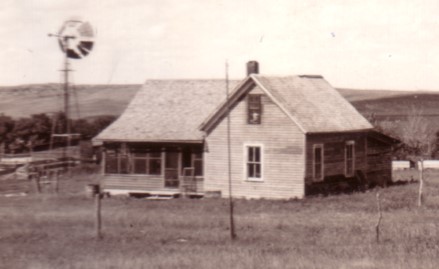 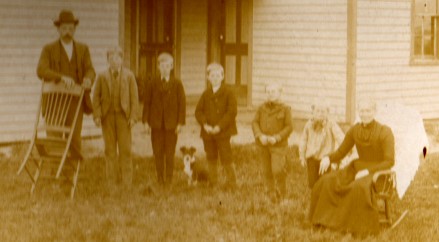 To cast the widest net, let us assume only that the five boys are brothers, and the man is the father. (Let us *not* assume any of the other obvious likelihoods, i.e. the old woman is a grandmother, the father is a widower, and there are no sisters). Even disregarding the lack of any resemblance, they could not possibly be five of Ole Larson’s sons, as there is not enough age spread. Ole’s six sons were spread over 22 years; no combination of five could be spread less than 19. The spread between these boys is certainly less than 10 years. 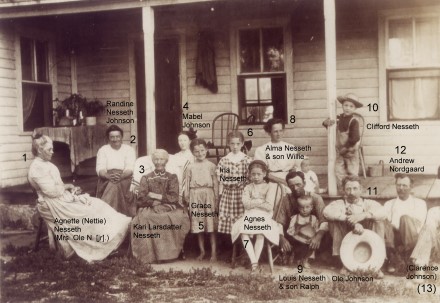 But, I have info on Kari’s descendants from cousin Carmen, and none of Kari’s children had five sons.

I have searched thoroughly through “Larsons & Slettens,” and found no family with five boys spread by less than ten years. Even Isaac Larson’s five boys some 20 years later were spread by more.

Orrin Moen’s book on the Moens, Voldens, Fransens, and Hovdes is formatted differently, making it harder to scan for candidates. I found only one, a certain Jeremias Hovde (1870-1951) and his wife Laura Fransen (sister of Axel Larson’s wife, Mina). Six of their 8 children were boys, including five born between 1905 and 1913. However, it is  extremely doubtful. The mother lived until 1952 and ought to be in the picture. Also the three other siblings (2 girls and 1 boy), although they were all older, and could possible be away from the home. But not the mother. On top of everything, there is a photo in Orrin’s book of Jeremias at age 50-60, and I can see no resemblance whatever.

It’s a long shot, but if *anyone* out there has any idea, do pipe up!