From my discoveries last week on the Smith Larson story, let us save his military career for later posts, and first examine his whereabouts at the US censuses of 1910 and 1920. You may recall from the previous post that Smith was discharged from his first (4-year) tour with the Marines in May of 1910. And from the post before that, that he wrote to Mabel Johnson in that year from somewhere in Washington state that he was “leaving for home” in 18 days. But where would that home be? Well, the census of 1910 finds him in Alden Township, Polk County, Wisconsin, at the home of his cousin Louis Nesseth and family! The second indication, this time of a stronger connection between the families of Ole Larson and Kari Nesseth. 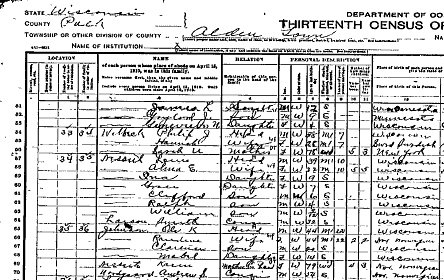 You will note that the very next household (probably on the same or adjacent farm) is that of Ole Johnson and Randine Nesseth Johnson, including their daughter Mabel, the addressee of all those postcards from Smith, and another cousin, Andrew Nordgaard. His exact relationship is unknown. I’m guessing he was a relative of Ole Johnson. And look who else is there: Kari (Larsdatter) Nesseth herself, age 79.

This domicile raises another interesting question: Upon his discharge, why did Smith not go to the North Dakota homestead he had claimed the year before, along with his brothers Axel, Isaac, and Oscar? At least I *think* it was 1909 – maybe it was 1910 instead??

Enough about 1910 for now. Fast-forward to 1920, after Smith’s second tour, which included combat at the “Battle of Saint Mihiel,” in the late months of World War One. (Much more coming on this after more research). This time, the census *does* find Smith in North Dakota, at the home of Axel and “Minnie” Larson. 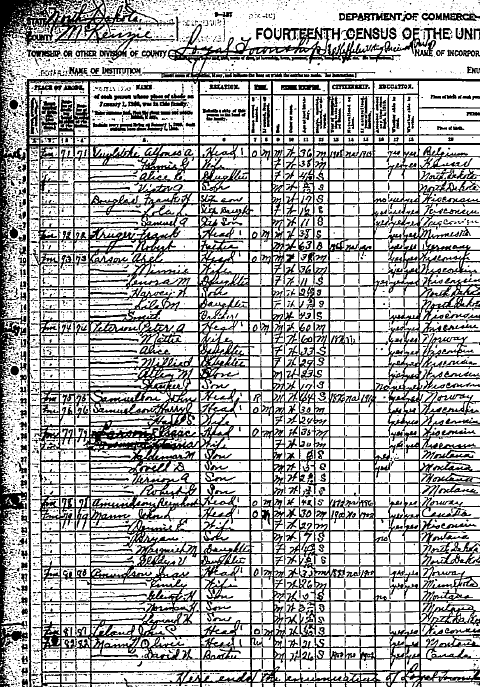 On the same page, we find many other familiar names, including Isaac-Anna and family, several Samuelson relatives, the Mann’s, the Amundson’s, and Atley Peterson.

So, maybe someone in Axel’s branch (cousin Carrol, are you reading this?, or Mary Ann, Lowell, Ron or Gary Whited, who don’t read me that I know of) might possibly remember some anecdotes about Smith. Cousin Helen Winchell just wrote that she heard of Smith being gassed in “the war.” Nothing further, yet, on the gangrene/lost leg story. Thanks to all of you who have already contributed info. It is beginning to come together. Stay tuned.