As promised, here are details on the 1909-10 homesteads of Axel, Isaac, Oscar, and Smith Larson. Using the GLO (Government Land Office) website, I found the “legal description” (section, township, and range) for each homestead. With map knowledge I picked up in the Forest Service, I could visualize the boundaries of each parcel within its section (square mile). Then using a web site designed for the purpose, I located the sections on Internet maps such as Yahoo maps, Google maps, and especially Google Earth. I highly recommend Google Earth software, which is free, and takes you by satellite photos anywhere on earth, with astonishing clarity.

Finally, I drew in the boundaries and labels with a photo editing program. Here is a wide view showing all four homesteads. The area shown is approximately 8 miles wide. Location is about 25 miles south-southeast from Sidney, MT. The thin white line near the left (along the west boundary of “Smith’s” land) is the Montana-North Dakota border.

*”Ron Whited’s house” is significant, as Ron is a grandson of Axel Larson. I don’t know who owned the land originally, but in the 1930’s, that farm was occupied by the Walter Hart family. My mother, Reatha, was working for the Hart’s when my father, Lovell, met and courted her.  By the time I was born, it was farmed by Ron’s parents, Lila Larson Whited and her husband “Skeeter.” Ron, incidentally, is the only relative I know of who still lives and ranches in the area, which is now very sparsely populated.

In the following image (which is not even the largest available blow-up), you can clearly see houses and farm buildings. This image is approximately 1.5 miles wide. 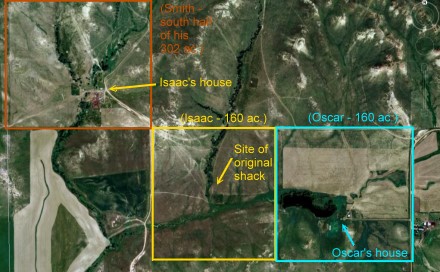 To view it yourself, give Google Earth or any map Website a latitude & longitude, such as the corner where Isaac’s and Smith’s land meet (NW corner of Sec. 14, Township 146N, Range 105W per legal description), which are: 47.4646375, -104.0333190. It is easy to spot the section and quarter-section lines, as that is where the seams appear where the photos are “stitched” together. That made it very easy to draw the property lines.

I identified the houses based on my visit to the site in 2003, expertly guided by cousin Larry. It is easy to recognize nearby features, such as the large barnyard to the south of Isaac’s house, and the pond west of Oscar’s. Here are photos I took of the two houses back then. 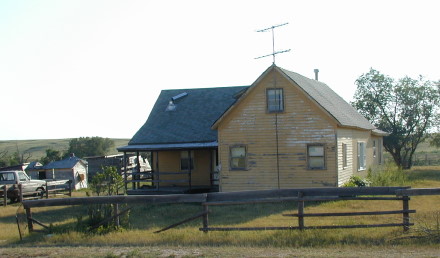 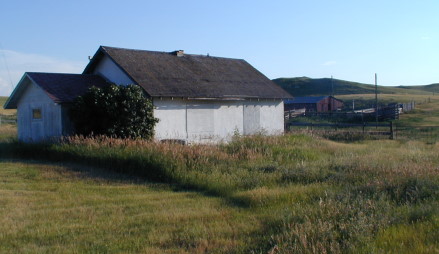 I’m not quite as certain that I hit the exact location of the original shack from the “famous” 1910 photo, but it is fairly close. 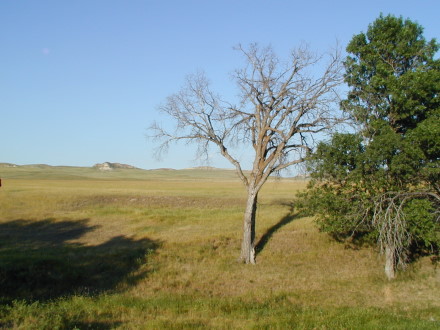 It doesn’t show up here, but near the dead tree is an indentation in the ground where the shack stood. According to Larry, the tree is the same one shown in the old photo (I am a bit skeptical of that).