To be sure, there are some misconceptions in it, as well as some new information. “Earl, ND” is not recognized by Google maps. But we know where Smith’s ND connections are, near the hamlet of Skaar. Smith had three brothers living in that area, but no sisters there.

The new information I refer to is the timing of losing his leg: only two months before his death. Still unclear is the underlying cause of  his frequent hospitalization both in the military and later. This article speaks of “chronic heart trouble and a rare blood disease” (Leukemia? Diabetes? Some effect of poison gas?). Let’s hope the forthcoming military records have more clues. So far, from the muster records, we have mention of enteritis, bronchitis, and exhaustion. Also, Smith was older than 42 at his death, either 44 or 45, depending on which birth date is correct. One also wonders who the “several visitors” were: Larsons? Nesseths? or Marine buddies?

Here is the probate notice for Smith, which Carmen found in the archives of the same newspaper. 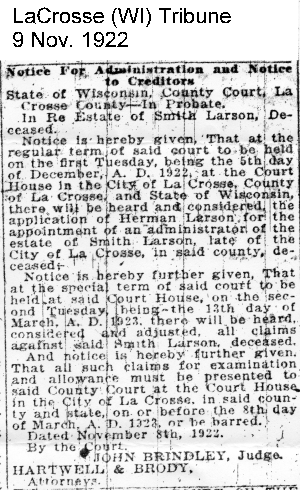 Carmen also sent copies of three of the postcards mentioned earlier. The story is becoming clearer, but more details still promise to emerge.