Here is a large group photo from one of the “Louise” albums, one of the few that has a date attached. I emailed this to a couple of you a few months ago, after my first visit to cousin David K., but I got very poor copies then, using a hand-held camera. This time I brought along my own scanner and captured the best copies I could hope for. 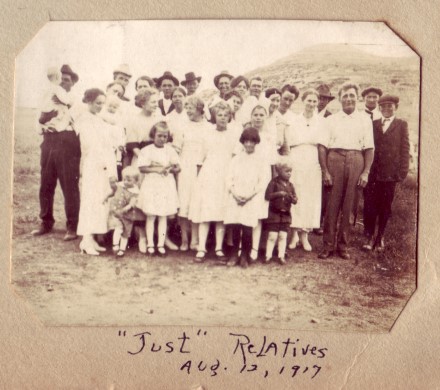 A few general comments: 1) The background is positively the North Dakota, Larson brothers’ homestead country. That is a little vague in this photo, but others confirm it. 2) I admit I am very poor at ID-ing people from old photos. After literally hours of staring and comparing with all the other pics I have, and with all my family info, I can only guess at a handful of these folks. 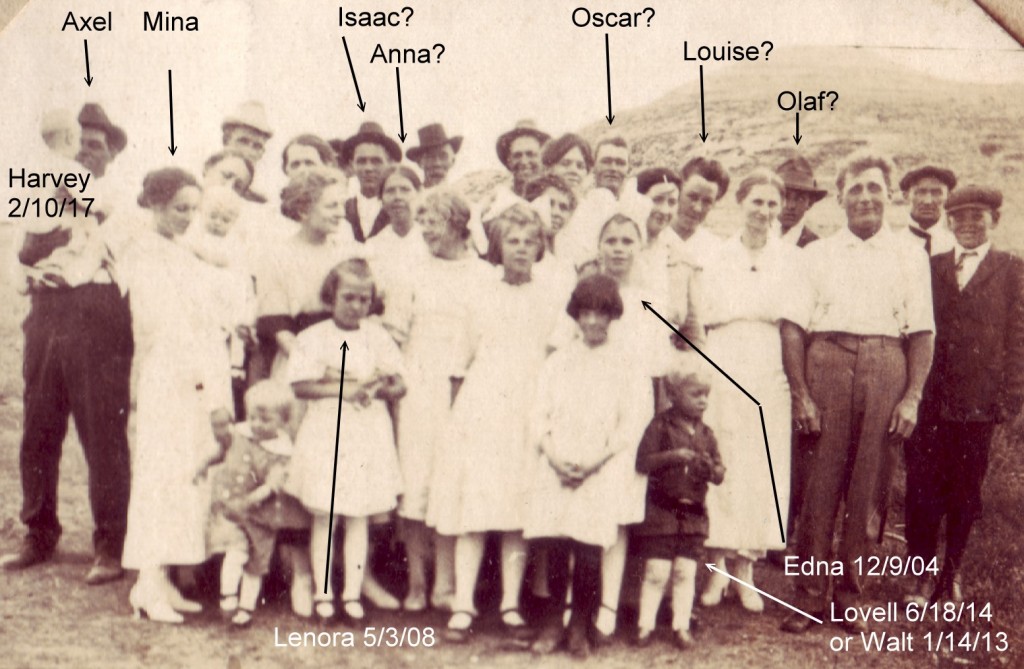 Even the adults named without ? marks are open to question.  Here is another shot almost surely from the same occasion. Some of the same people are in it, wearing the same clothes, but there are key changes. 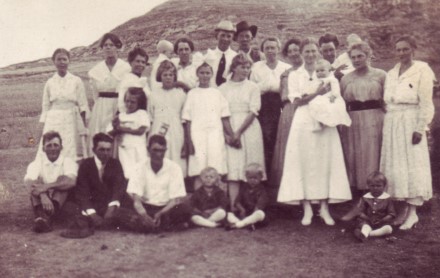 Both Walt and Lovell are there now. They are almost the only ones in either picture I am really certain about. Oscar and Olaf (if that is who they are) are now down in front; Axel and Isaac are missing, and Anna is standing behind that handsome dude with his sleeves rolled up, who is sitting next to Olaf. For a while, I thought that one might be Isaac, but the resemblance (in my eye) is extremely poor.

Thanks to Edna’s notes, and to other photos like the one below, I am sure I have her  and Lenora pegged. 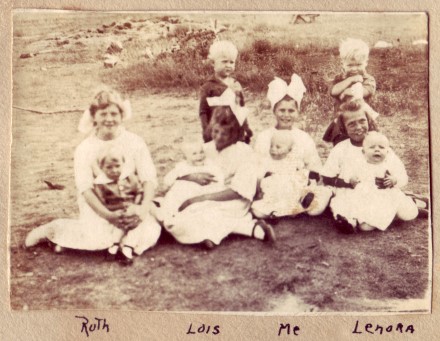 But yikes! Who the heck are “Ruth” and “Lois??” They are in the group shots as well. They both look older than Edna, so must have been born between approx. 1898-1903. I have scoured the “Larsons and Slettens,” plus the Samuelsons, Moens, and even the Nesseths, and can find no one by those names that could possibly be them. The little tyke with the white collar is another huge mystery. He must have been born in 1915 (give or take a year), and there is no one in my records who fits.

At least one of the babes-in-arms is also unaccounted for. One is surely Harvey. Another could be Vernon, although he was only three weeks old on this date, and none of them look that young. But even if so, there is no one to match the third baby. So, pipe up, cousins! I need some serious help on this one.

Next: a new, early picture of “Isaac’s house.”