In one of those albums at David Kasold’s is what must be the original print of the famous 1910 “shack” photo. 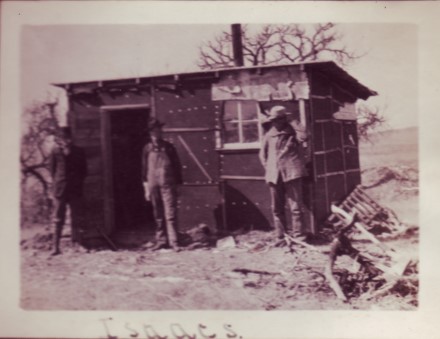 This print, although smaller than the picture postcard I made my best copies from, is at least as clear, perhaps a little clearer. On the same album page is what appears to be the main portion of Isaac’s “real” house, located on Smith’s land claim. 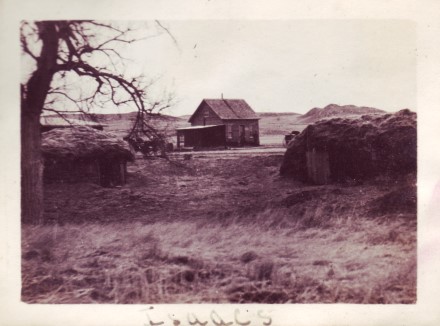 Lots of interest here. First, in the foreground, two sod structures that must be root cellars or other food storage. Cropping in a little closer, we can see parts of two vehicles. 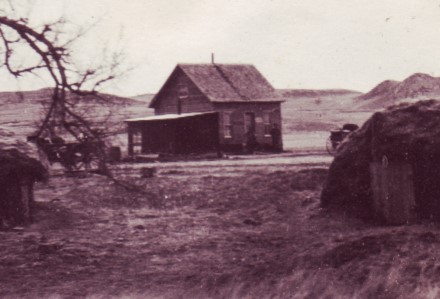 On the left, behind the tree branch, appears to be a horse-drawn wagon, and on the right, mostly hidden by the sod structure, is the rear of an open buggy, or perhaps a “horseless carriage.” And ramped up to the native resolution of my scanner, 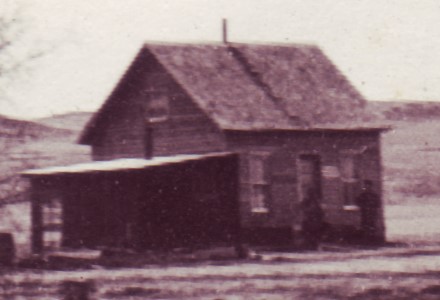 we can make out the figure of a man near the right corner, and possibly another human form framed by the doorway. This picture seems to be taken from the west.

I am guessing that the side with the door is where an addition was later built, giving the house its final and more familiar shape. If so, then the  picture below (by Uncle Ivan, approx. 1941) was taken from the opposite side, which became the “front.” 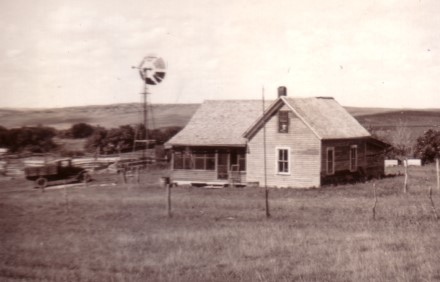 Note the lean-to structure behind the house, which looks similar to the one in the foreground of the older photo, supporting my guess about the viewing angles. The final interesting detail is that the second photo was labeled “Isaac’s,” even though it must have been taken long before Smith “disposed of” his claim when he reenlisted in the Marines.

Next: more about the Nesseth’s.