A few months ago, we established that there were close connections between Smith Larson and his cousins in the Nesseth family. (So far, I have not found word of contact between any of Smith’s siblings and this branch). Smith was even listed as a member of Louis Nesseth’s household in the 1910 census. He must have taken the picture, now in Carmen Stifstad’s collection, of Kari Larsdatter (sister of Ole Larson) and her kin, also around 1910. For a larger view, click on the picture. 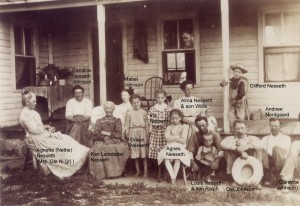 In case you missed it earlier, Kari  immigrated with her husband a few years after Ole came with his mother and two other sisters. It seems that Ole’s descendants pretty much lost track of the Nesseths between Smith’s death in 1922 and the late 1980’s, when cousin Carmen and cousin Aline met. 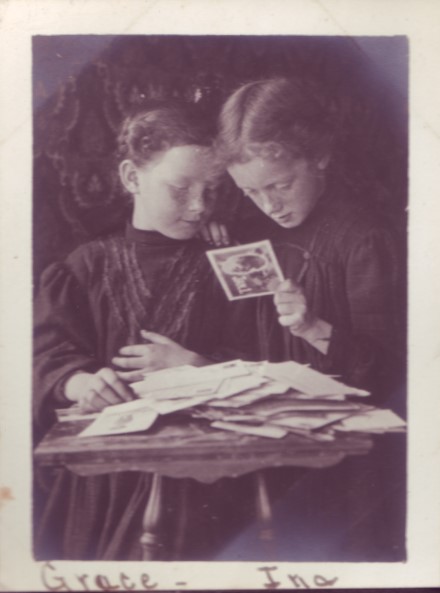 The above must also be from around 1910, which would put their ages at 8 (Grace), and 10 (Ina). And those postcards they are admiring must have been sent to them from Smith on his travels as a US Marine in 1906-1910. Smith also sent cards to another young cousin, Mabel Johnson (mother of cousin Carmen). In fact, Smith was fond enough of Grace and Ina to name them as beneficiaries should he have died in the line of duty.

And below is another picture of Grace and Ina, looking a few years older, also from the “Louise albums.” 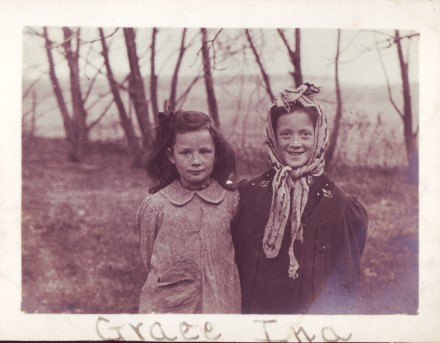 Next: more on the Slettens.

"The Shack" Improved
Blood of the Slettens (Happy Halloween)