I found a little follow-up info on Inar Amundson and family. They departed Oslo, destination Quebec, on 14 July 1893, according to Oslo police emigration protocols.

There were papa Ole Amundson age (stated) 46, wife Petra (instead of Petronelle), 51, Martha, 11, Elizabeth, 10, Einar, 7, and Anna (sic), 5. As usual their ages are only approximate. From their birth records, Einar would be 9 years old, not 7, and Ole 47, not 46. They left Norway (presumably for England) on the steamship Angelo, the same ship that carried some of the Slettens, and Helene Olsdatter, in 1881. More interestingly, they were *all* listed with the surname of Amundsen, the earliest records I have found that broke with the long-held naming customs of Norway, in favor of the more modern usage of surnames. Decades later, the change was mandated by Norwegian law. That’s all I have so far on their journey.

In the 1900 US census, James River Valley, ND, Anna’s name has changed to Amelia. The two eldest sisters are gone from the home. Also, Millie told me there was another older sister, Sara, who stayed behind in Norway. 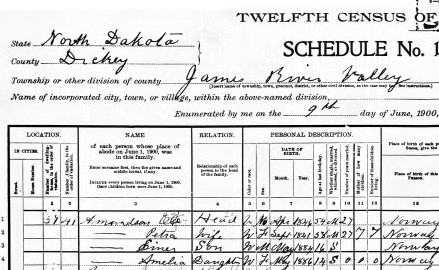 Later on,  Ole and Petra moved to northwestern Washington state, near Marysville; the censuses of 1920 and 1930 corroborate that. Maybe this was part of the attraction of later generations to the West Coast. Besides two of Isaac Larson’s boys moving to Longview, so did Glenn and Ray Amundson, as mentioned earlier. Coming now to my own generation, here I am at age four, with my cherished playmates, the four Amundson girls.

I believe Karen (Ray’s daughter), the youngest, is on the left, then Marilyn and Ardith (Glenn’s), on the right is Kathy (Ray’s elder). We were not aware of the grandparental relationship at the time, and struggled to inventory just how we were “related.” We traced an even more circuitous route via our parents. My uncle Vernon Larson married Audrey Walker. I don’t know the Walker family’s history, except that Audrey’s sister, Lorraine Walker, married Glenn Amundson. So Marilyn and Ardith, while not biologically related to me, are my cousins’ (Vernon’s children’s) cousins. One step further out are Kathy and Karen, my “cousins’ cousins’ cousins!” Talk about extended family!

Next: Who do you take after?

Amundsons, part I
Whom do you take after?