In an earlier post, I put up a recently discovered photo of a large group of (mostly?) Larsons, taken in August 1917. I even ventured a few guesses as to the identity of some individuals. After long study and comparisons, I am changing one or two of those guesses, and adding a few more. However (to repeat myself), I am not very good at this, so take it all with a grain of salt, and chime in with any guesses or critiques you wish. Click on any of these photos for an enlarged rendition.

Let’s start with the Larson boys, Lovell and Walt. I think we can all agree that they are #30 and 31, although which one is which is not quite so clear. I’m leaning toward #30 for Lovell.

Next, the four Larson men: Axel (2), Isaac (6), Oscar (10), and Olaf (14), and one spouse I am pretty confident of, Anna (22) *(caveat at end of post). I am now convinced that the photo below (long familiar from my mother’s collection, and also included in Lucy’s albums) was taken on the same occasion, not least because the four  men are wearing the same clothes (sans hats). 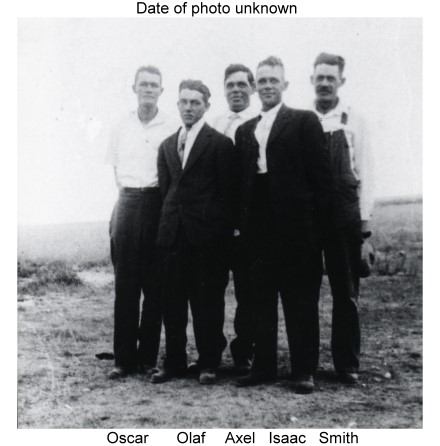 Two Larson children are identified by labels on other photos in Lucy’s album: Edna (Kohlstead, Louise’s 13-year-old daughter, #29), and Lenora Larson (25). Also identified this way are Edna’s two companions, Ruth (26) and Lois (29), last names and relationships unknown as yet.

Let’s show those thumbnails again, and go a little further out on a limb:

Four semi-wild guesses based on comparison with at least one other photo: Mina Larson (19, or possibly 4), Inar Amundson (3), Emily Hart Amundson (18), and Mary Hart Larson (13). Note the resemblance between 13 and 18 when they are standing close together in Group 2. Finally, the small children, based on their apparent age and association: Harvey Larson (1), Neva Larson (33 – appears only in group 2), Norman Amundson (20), and Glenn Amundson (24).

Wilder yet, I think I may have spotted one Samuelson in there, which could imply there are others. I’ll go into that in a later post, as well as responding to the many comments I hope to receive on this one.

* Vernon Larson was born 23 July 1917, less than a month before the labeled date of the above photo. So why isn’t the baby there, if Anna and Isaac both are? Below is a picture from the following winter: 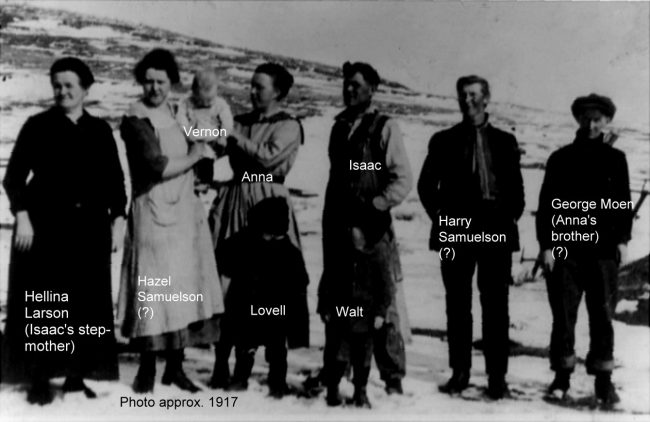 Again, you can click on the photo to enlarge. It’s a long shot, but maybe George Moen is in that mob photo too! Stay tuned.