Birkebeiner, past and present

Nordic ski racers and fans recognize the name as that of a demanding 54-kilometer race with events in Norway, Canada, and Wisconsin, USA.

The name comes from a political faction contending for power during Norway’s century of intense civil wars (1130-1227). During the multiple conflicts, forces coalesced into two main parties. The Bagler party, centered in Oslo, enjoyed the support of the Church, and superior military strength (most of the time), while the Birkebeiner were popular among the farming communities of inland Norway, and the fishermen and mariners of the Atlantic coast. Their name comes from the birch bark they used (according to legend) to protect their feet and legs, as many were too poor to afford protective armor or footwear.

So what, you may ask, is the connection to the sport of Nordic ski racing? It is a journey in January of 1206 to rescue a young prince from the oncoming  Bagler army. When King Haakon III Sverresson (a Birkebeiner) died on 1 January 1204, he left no legitimate heirs to his throne. Late the following year, an untitled woman named Inge of Varteig came forward with a young son whom she claimed was conceived with King Haakon a few months before his death. Her claim was corroborated by several associates of the late king, and eventually Inge successfully underwent a trial by ordeal, the 13th-century substitute for DNA testing.

This development was not taken well by the Bagler, who sent a force of soldiers to find and kill the boy. During Christmastide, as the contingent closed in on his hiding place at Lillehammer, a small group of Birkebeiner warriors set out on skis, carrying the toddler, in a daring midwinter rescue attempt. Beset by daunting blizzards, unable to use the less formidable route via Gudbrandsdalen, only the two strongest warriors were able to complete the journey, bringing the eighteen-month-old safely to the Birkebeiner capital city of Nidaros (Trondheim).  The rescue is depicted in this famous 19th-century painting, and is re-enacted in costume at some of the modern sports events. 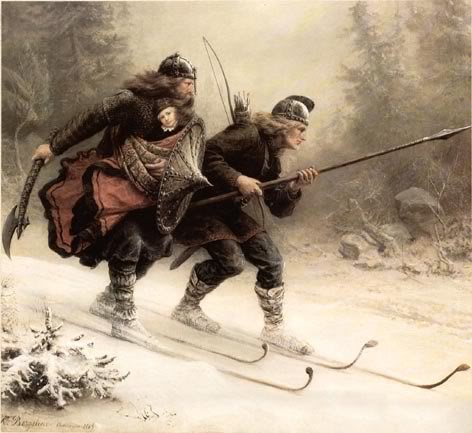 The boy succeeded to the throne in 1217, skillfully consolidated his power during the next decades, eventually reconciling with the Bagler and ending a century of civil strife. The details of how the Birkebeiner chose Haakon over two other pretenders, I can only find in Norwegian. But this link will I hope bring up a partially usable Google translation. The same article is also the only detailed look at Inge of Varteig.

Under Haakon IV Haakonsson, Norway arguably assumed as much importance on the European stage as it had enjoyed even during the Viking era, since it was now a unified nation, rather than a handful of squabbling, if powerful, petty kingdoms, as in the heyday of the Vikings. Eager, it seems, to restore some of the Viking glory, Haakon sailed to Scotland, captured the northern islands, and launched an invasion to reclaim the mainland. However, his fleet was pounded by storms, forcing a retreat to the Orkney Islands, where he fell sick and died in December of 1263.

After his death, the status of Norway again gradually declined. The plague, or Black Death, in the mid-1300’s killed as much as half the population. Norway was merged by royal marriage with Denmark in 1380. The royal line died out, and Norway ceased to be an independent country for more than 500 years, until 1906. The core of this period was dubbed by Henrik Ibsen “the 400-year night.” Perhaps not coincidentally, the period from approx. 1400-1800 is now known by climatologists as the “Little Ice Age,” due to exceptionally cold weather throughout Europe. 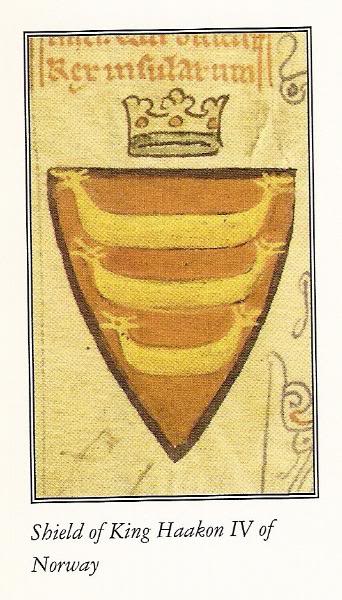