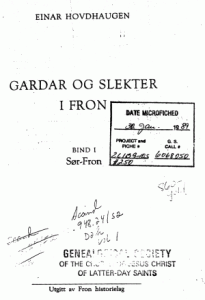 Back in June, I did some work on the bygdebok (farm & family book) for Fron parish, the source cited by Ragnhild Kjorstad in her landmark letter of 1989 regarding the pedigree of Lars Paulson. Based on my reading of this prior source, I concluded that Ragnhild made a mistake when she connected Lars’ father, Paul Svensen Flaade, as a son of Sven Paulsen Lillegaard, who owned the latter farm prior to his death in 1756.

But there is another possibility I did not consider at the time: (c) What if Sven Paulsen Lillegaard had two sons named Paul! Wildly unlikely, to be sure, but not completely unprecedented. In poring over a large amount of census data from a variety of places and periods, I have seen it once or twice, where two children in the same family had the same given name. Here is a related fact: it was customary in 19th c. Norway, and elsewhere, to reuse a child’s given name if an older child  died before another of the same sex was born. One can imagine possible reasons for expanding on this custom; for example if the first son was sickly, with a poor prognosis for survival, or possibly in the case of an illegitimate child (!- and we have bumped into a few of those in our closet, haven’t we ;-)).

In our own time, we have the example of boxer, buffoon, and pitchman George Foreman, who named all five of his sons “George.” I thought that was just a joke just made up for a TV commercial, but I looked it up. It is a bona fide, legal, factual joke.

I’m not “rehabilitating” Sven Paulsen Lillegaard and his 4 generations of ancestors back into my data just yet, but perhaps I was a bit hasty in ruling them out.

All Generations
Pilgrims Galore - with scandal