I am deleting update 2, as this post updates and corrects the same information. Below is a list of the eight ancestors of Dan Myers who were born in New England during the first 35 years of European settlement.

Mary Rowell (4th g. grandmother) b. 3 Jan 1649 in Salisbury, Mass. Parents Valentine Rowell and Joanna Pinder came from England and were married in Mass. Colony. After a “morals offense,” Mary Rowell married Thomas Frame, who had earlier come from England as an indentured servant.

Abigail Perkins (4th g. grandmother) b. 12 Apr. 1655 in Hampton, New Hampshire. Parents Abraham Perkins and Mary Wyeth both came from England. Married John Folsom. Perkins ancestry is traced back to medieval royalty, which means there are hundreds of them, including William the Conqueror, Henry I of France, Charlemagne, even Judith Martel. And a huge cast of kings, princes, dukes, and counts of England, France, Germany, Spain, Italy, with tendrils even back into Scandinavia via Russia. Mind you, these are all direct ancestors, 20-30 somthingth great grandfather/mother of Dan Myers. I’m still working on this. So far, Dan Myers’ pedigree has grown from 36 individuals to over 700. Some of the new ones, maybe half, were already in my data, the rest I have added in the past month. I am not finished yet, but there should be an end somewhere.

Francis Lyford (4th g. grandfather) b. 1647 in Exeter, New Hampshire. Francis was a mariner. His father John Lyford came from England as a child. Francis’ grandfather (also John Lyford) came to Plymouth in 1624, only four years after the Mayflower. The elder John got in some trouble over his preaching, moved to New Hampshire, and soon thereafter to Virginia, where he died a few years later. When he moved to Virginia, he is said to have left his wife and family in New Hampshire, eventual birthplace of Francis Lyford. Origin of Francis’ mother Ann unknown.

All of these ancestors have been verified in additional sources, besides “One World Tree.” They are listed in the following 4-Volume set: 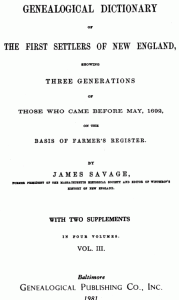 A new internet cousin, Nancy Hallberg (approx. 8th cousin) has sent me excerpts from “Fifty Great Migration Colonists …” by John Brooks Threlfall, 1990, which gave us the “morals offense” of Thomas and Mary, among other details.

Cousins of the Queen
Pilgrims to Potentates