Here is another link documented by cousin Orrin Moen, but overlooked by me until now due to a software glitch. The “loser” of the Norman Conquest, Harold Godwinson, had three children  who escaped to Denmark after Harold was killed at the Battle of Hastings. One of those was a daughter, Gytha of Wessex, who later married duke Vladimir II of Kiev. Well, guess what? Vladimir II was Lovell Larson’s 26th great grandfather, the son of Vsevold I Yaraslovic, mentioned in a recent post. Therefore, Harold Godwinson is my 28th great. Also, Harold’s treachorous brother, Tostig, who joined forces with Harald of Norway in his invasion, had children who escaped to Norway.  One of them became an ancestor of Earl Skule Baardson, father-in-law and deadly rival of King Haakon IV, and so, another ancestor of mine! So here is the score:

William the Conqueror: ancestor of Reatha Larson via Dan Myers, through a succession of kings of England;

Harold Godwinson, Tostig Godwinson, and Harald Hardrada: all ancestors of Lovell Larson via Anna Moen, through various branches of the Fairhair dynasty of Norway. 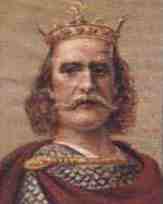