About a month ago, I announced that I was “nearly finished” tracing all the threads of the European nobility to which a certain ancestor of Dan Myers had led me. At that time, Dan’s pedigree had over 800 names in my records. It took all this time, but now I really have finished, and the count stands at over 1,000! In the course of adding these names, and cleaning up some data problems, Anna Moen’s pedigree also increased to over 1,000 names. Isaac Larson’s increased by a handful, still in the low 200’s (but one line does go back to the early first millennium). I have updated the “Full Pedigrees” pages for those three individuals. Please visit them and let me know what you think.

One further ancestor of note: the Roman Emperor Constantine I. 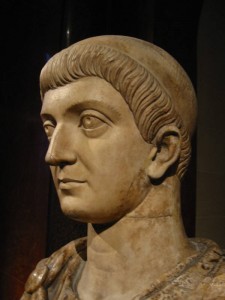 Constantine, you may recall, was the first emperor to embrace Christianity and end persecution of Christians. He also conquered large swaths of territory, reunifying the fragmented empire for the final time. Soon after his reign, the Roman Empire went into steep decline. Constantine is not an ancestor of Charlemagne (surprise!), yet is an ancestor of both Anna Moen and Dan Myers by a very different path. which includes a marriage between a proto-Viking king and a princess of the Vandals(!) 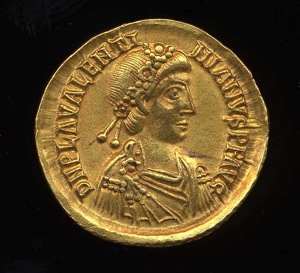 A century and change after Constantine, his great-grandson, Valentinian III was murdered, and his daughter Eudoxia (438-530 CE) married to Hunneric, king of the Vandals, who, well, you know, “vandalized” Rome, big-time, in 455.  Hmmm. Not what I would call a peaceful union;  nevertheless they had children together. Eudoxia & Hunneric’s “Vandal” grand-daughter, princess Hildis, married a certain Valdar Hroarsson (b. 547), a king in some part of Denmark, who was one of the earliest Vikings. They passed their genes on through Scandinavian nobility for almost 400 more years, until one of their someteenth-great-granddaughters married Godwin, Earl of Wessex, and had sons named – OMG! – Harold Godwinson and Tostig Godwinson of 1066 fame, both of them 28th great-grandfathers of ours, by two different routes.

And now I just read that the Vandals themselves came from Scandinavia, centuries before they sacked Rome! Looking into this …