Cousin Gail Myers and some other relatives traced Dan Myers’ ancestry back to a certain immigrant Philip Myers, born in Mainz, Germany in 1759. Using LDS sources, I found Philip’s birth record in the German churchbooks, along with several generations before him.

More problematic has been Philip and his family’s early life in Maryland. I found one reference to him in the following source: 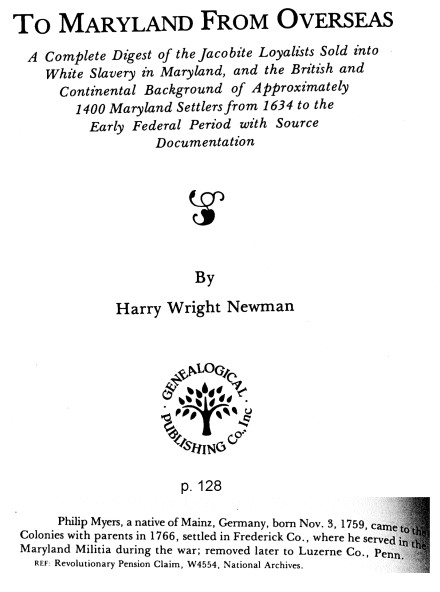 As for his parents, Valentini Myers and Theresia, I have found nothing at all so far. I did find Philip’s military pension claim, along with a land grant to a Lieutenant Lawrence Myers. There are rumors that Philip Myers had a brother Lawrence, which would make sense, considering the presence of a “Lawrence” in each succeeding generation. 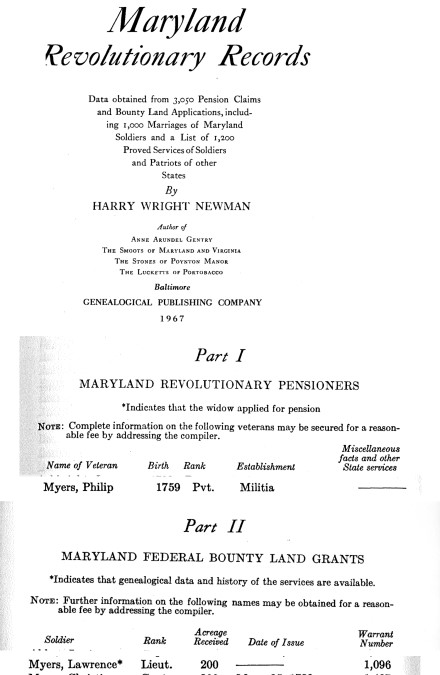 So far, I have encountered no documentary evidence that this Lt. Lawrence Myers is Philip’s brother. It is a little troubling that the first source makes no mention of any siblings, only Philip and his unnamed parents.

Philip has quite a few descendants, as evidenced by his appearance in no less that 18 family trees registered with Ancestry.com. One of those trees includes a note that reads, “He followed his brother Lt. Lawrence and then Henry to the Wyoming Valley (PA).” There are no source citations, and the email address given for the owner of this family tree is not valid. Note that there are Henry’s in succeeding Myers generations, as well as Lawrence’s. This genealogist may be onto something; I hope I am able to contact her some day. Stay tuned.