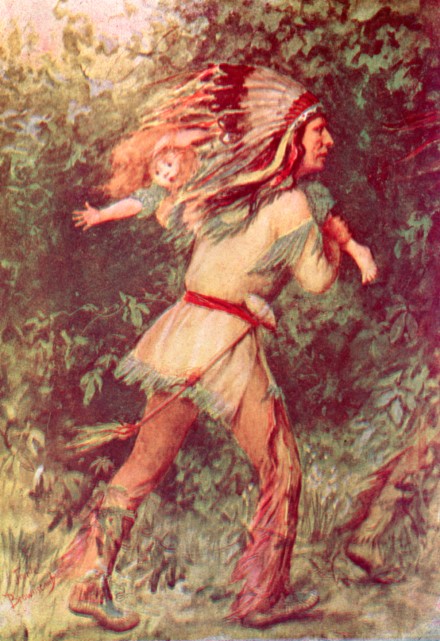 Note that the depiction above is highly Romanticized, especially the Indian’s costume. The girl’s expression of panic, however, and her bare feet, are both poignant and corroborated by documented accounts of the event.

Here are a some corrections and additions to my earlier post on Francis Slocum, the Wyoming Valley (PA) Quaker who was kidnapped as a five-year-old girl in 1778, and lived the rest of her long life as an Indian, becoming queen and matriarch of her village, discovered by her brothers only after six decades of searching.

Frances’ father and a brother were murdered by Indians just weeks after the abduction. It was suspected that the attackers were from the same band of Delawares, but their tribal and individual identity is uncertain in both incidents.

For the visits and interviews with her, the translator was not a village woman, but a Mr. Miller from the nearby White settlement of Peru, Indiana. I have edited these two corrections into the original post.

I received on Inter-Library Loan the two complete books on Frances Slocum. The more personal of the two is 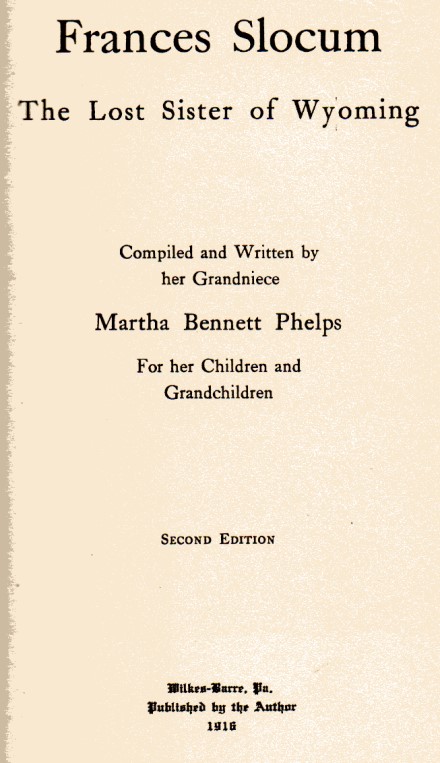 (First edition published 1906) The author, Martha Bennett Phelps (1833-1920), turned out to be no relation to our ancestor Martha Bennett, but instead is the daughter of one Ziba Bennett, originally of Connecticut, who came to the Wyoming Valley in the early 1800’s. Ziba Bennett was not related to Thomas Bennett (originally of Rhode Island), “our” Martha Bennett’s father. Ziba Bennett married Hannah Slocum, Frances’ niece. By “not related,” I mean not closer than 5th or 6th cousins, which is where we lose track of both of the Bennett pedigrees. No doubt the two families knew each other in that small community, and if they were such distant relatives, had no more idea of it than I have. Nevertheless, it is possible that Martha Bennett Myers (70 years old and very much alive at the time of the author’s birth) may have been her godmother or otherwise a namesake.

The book is built mainly on anecdotes told by the author’s relatives, but also carefully tied to documentary evidence collected in the piece below. Both of the books are flawed by the racist stereotypes of the times, depicting the Indians as an ignorant, inferior race.

The other book was published earlier, and as mentioned, used as a resource by Mrs. Phelps. 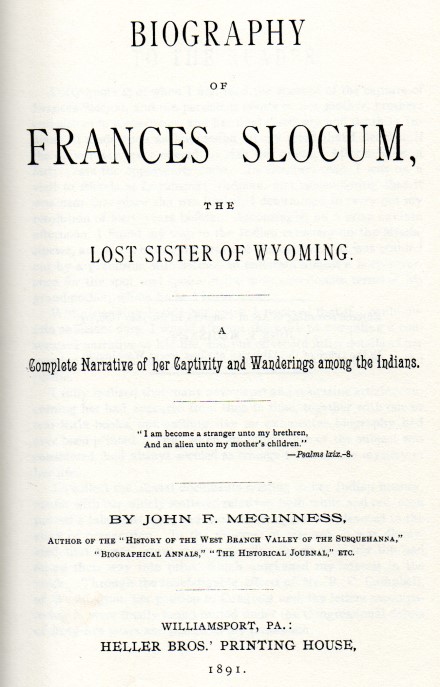 It is a thoroughly researched, exhaustive account of the affair and its historical context, with reference to the Revolutionary War, the Indian wars, the rituals and traditions of the tribes involved, etc. etc. Among its many details are several “near-misses,” where if only Frances’ brothers had encountered certain Whites who had seen or heard of her, she might have been located much sooner. On the other hand, her adopted kin took pains to keep her undiscovered, most likely with Frances’ approval, at least by the time she reached adulthood. Also described is the action of Congress that allowed Frances and her family to remain on their land when the rest of the Miami tribe was forced westward into Illinois.

The latter volume was reprinted as late as 1974, and the copy I received on loan is in good condition. The former is quite yellowed, with failing binding, and I was pleasantly surprised that the university library that owns it allowed it to circulate to me. I highly recommend both of these books to anyone who finds this tale to be of interest.

Next, we will return to my paternal ancestors; specifically to the Norway of the 1840’s, and the legal difficulties of our second great-grandmother, Anne Larsdatter.