Tensions were high in the summer of 1778. Most of the men of the Wyoming valley were with the Patriot army, fighting under General Washington many miles away. It had been a very bad year for the Revolutionary forces, but the tide was turning.  On June 18th, the British abandoned Philadelphia, ending an 8-month occupation. It is unknown whether news of this development had reached Wyoming by the beginning of July, as a force of nearly a thousand British regulars, Loyalists, and Indians, under Colonel John Butler, prepared to attack the settlers. We join the text of “Families of the Wyoming Valley…” as it quotes the very words of Martha Bennett Myers:

“In June, 1778, about two weeks before the battle, we had seven head of horses stray away. The boys going in pursuit of them asked me to go with them and pick cherries. We had not gone far into the woods before the boys saw some young hickories broken and twisted in a peculiar manner. One of them exclaimed, ‘Oh, the Indians! The Indians have taken away the horses.’  This turned out to be the fact. Upon our return we learned that the Indians had been at Peter Harris’s, above Scofield’s. Soon after the two Hardings were killed; and now we, with the settlers generally, moved into the fort. It was crowded full.”

On July 3 an Indian on horseback was seen at the mouth of Shoemaker’s creek, within sight of the fort. Upon finding that he was noticed he galloped off. Colonel John Butler now sent orders to the people in the fort to surrender, which were promptly refused.

Inside the fort were a few officers on furlough from the Revolutionary army, including another Colonel Butler (Zebulon), which confuses the narrative somewhat. The total number of militiamen present, which basically included all men not to old to walk, and all boys old enough to use a weapon, was around 400.

The question was now mooted whether they should go out and fight the enemy on the plains above, or keep within the fort until re-enforcements should arrive. Captain Spaulding was coming on with an efficient, well-trained company, and Captain Franklin was on his way from Huntington with a company of volunteers, and it was the opinion of Colonels [Zebulon] Butler and Denison that it was best to delay until the recruits should arrive. Captains Lazarus Stewart and William McKarrachan headed the party which were for marching out of the fort at once and meeting the foe.

A vigorous and heated discussion followed. When it was over,

In this case, as in many others, hot-headed and reckless men prevailed against sober counsels. The little army formed and set out in the line of march in high spirits, with fifes and drums playing and colors flying. Mr. Bennett was one of the “old men” who volunteered to defend the country. He, however, was so certain that the little army were about to be drawn into a snare and cut off, that he declared he would go with them no further than “Tuttle’s Creek,” the distance of one mile or a little more, and he carried out his purpose.

Thomas Bennett turned back, but his son Solomon continued on. Listening to the rifle shots from a distance, Thomas knew he had been right. The Indians waited in hiding while the militia marched past toward the British line, then  when they were beyond any possible retreat, sprang up and crushed them mercilessly.

Our text does not describe the battle itself, nor the next night’s massacre, but there are many accounts of those events, not all of which are in firm agreement. It does say that the day after the battle (Ironically, July 4) , Solomon Bennett returned to his father’s cabin and told of his escape, and that father and son, along with brother Andrew, fled at once to Stroudsberg, in the Delaware Valley.

That night, after Colonel John Butler and the British soldiers had left the area, the Indian warriors descended on Forty Fort, where they dragged sixteen men and boys into a circle around a rock. There, at midnight, the Yankees were slain with tomahawk and knife by the aforementioned Queen Esther, whose own son had been killed at another locality just days earlier. Our text also does not reveal where Martha Bennett and her mother were at the time; presumably, they were at their nearby cabin. After the battle and massacre, the Indians collected their British bounty on 227 scalps. 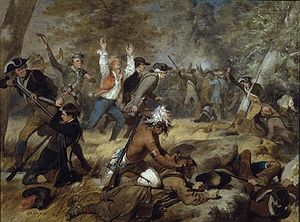 "Massacre of Wyoming" by Alonzo Chapel, 1858

Returning to our selected narrative,

Something more than a week after the battle the houses throughout the settlement were fired. The smoke arose from all quarters at the same time. Soon after this the widows of Timothy Pierce and John Murphy (their maiden name was Gore) with Ellis and Hannah Pierce — maiden ladies—requested Mrs. Bennett to visit the battle-ground with them to see if they could identify the bodies of Pierce and Murphy. They found the bodies of the slain broiling in the hot sun, but so changed that they could not distinguish one from another. The husbands of the two young widows, and three brothers—Silas, Asa, and George Gore—lay upon the ensanguined field, but the heart-broken visitors had not even the poor satisfaction of identifying their remains.

Perhaps in an exaggerated attempt to vindicate the Indian perspective, the Wikipedia article on this incident highlights the dubious Tory assertion that  there was no “massacre” at all. This reading is based on the fact that women and children were not killed outright. Indeed, this was in keeping with the agreement between the Indians and the British commander, Colonel John Butler.

I had thought that this post would end the series, but there is more of the Bennett family’s adventure left to tell. Stay tuned.