Since my last post, cousin Gail sent me yet another information-filled packet. One item in particular provides a closer look at Philip Myers (1759-1835), great-grandfather of Dan Myers, and Philip’s brother Lawrence (1754-1810).

You will recall that the Wyoming Valley is in Pennsylvania; the territory that would one day be the state of Wyoming had not yet been discovered by Europeans at the time of the Revolutionary War. Here begins the passage on the brothers Myers. The highlighting is from an earlier researcher, either cousin Gail or his niece, cousin Paula. 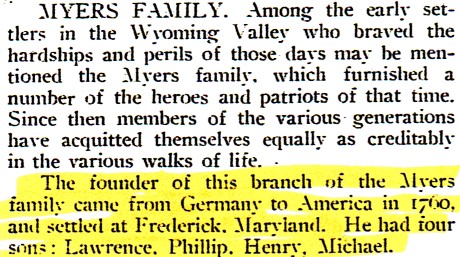 Another printed source gives the year of immigration as 1766. By “hardships and perils of those days,” the author means the many Indian wars and conflicts in the area, including an infamous massacre at Forty Fort in 1778, immediately after the fort had surrendered to the invading Indian and British forces. The same Horace E. Haydon wrote a whole book on the massacre and its aftermath. It can be read for free at this site. It is awfully dry, though. I recommend instead, this  brief article.

Frustratingly, the name of the father of Philip, Lawrence, Henry, and Michael Myers; that is, the “founder of the family,” is apparently unknown, even to this very well-sourced author. I am sure it is Valentini (or some variant); I believe I have that in some document from cousin Gail, as well as from the Mainz church records (see previous post). But I have yet to find any documents relating to the father’s presence in Maryland. 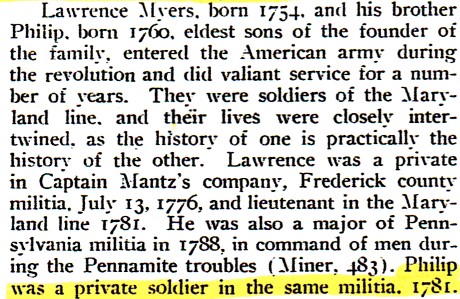 The “Pennamites” were the Tory settlers who had aligned with the Indians and British, still making “troubles” ten years after the massacre at Forty Fort. One can easily imagine the spiral of revenge upon revenge that ravaged both sides. The narrative now backs up to 1777. It  implies both brothers are present; Lawrence must still be a private: 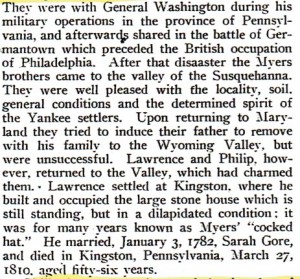 Here is Wikipedia’s account of the Americans’ defeat at Germantown.

Note that no children are mentioned of Lawrence Myers and Sarah Gore. That will figure into Philip Myers’ family in the next post. Stay tuned.