Continuing with the passage on the Myers family from “Genealogical and Family History of Wyoming and Lackawanna Valleys,” 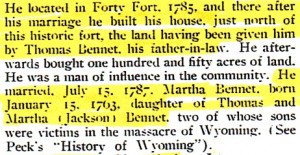 Martha Bennett, my 4th great-grandmother, would have been fifteen years old at the time of the massacre. Presumably, when her two brothers were killed (this is contradicted by other sources), she was driven (along with the other women and children) into the surrounding wilderness by the attacking Indians, while their houses burned, and their men and older boys were slaughtered. There were only a few soldiers guarding the fort, as most of them were in combat elsewhere.

It must be remembered that such atrocities were also often committed by the whites, each side seeking ever-greater revenge. This particular massacre could never have happened except as part of a white-vs.-white man’s war. For starters, the Indians were paid ten dollars by the British for each Yankee scalp they collected. Remember also that the savage practice of scalping one’s victims was itself introduced to the Indians by whites from Europe, where it had been known since at least the 11th century. (Oh-oh, it was our “nth” great-grandpa, the Earl of Wessex, who was noted for it back then.)

After they married nine years later,

In addition to William, child number two (Lawrence) also removed to Sunbury, Ohio; in fact, the two brothers are credited with the founding of the town. This “Lawrence” was the father of Henry B. Myers (father of Stephen Bennett Myers) and thus the great-grandfather of Dan Myers. Getting back to the 1790’s, the youngest four children of Philip Myers and Martha Bennett were: 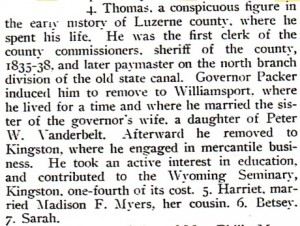 There follows a lengthy biography of Philip & Martha’s eldest son, John Myers, and his family and descendants. One of John’s sons was named Lawrence; I guess he was the “Lawrence” for that generation. This Lawrence stayed put to become a very rich citizen of the Wyoming valley, and so gets an elaborate biography himself. I am a little confused about the succession protocol for the generational moniker, “Lawrence.” Hopefully cousin Gail can fill us in.

As for Martha Bennett’s pedigree: 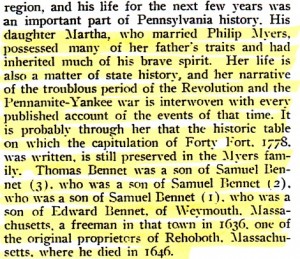 A word of explanation about the arrest of Thomas Bennett and his companions by the “Pennsylvania authorities” in 1770: The Wyoming valley was claimed by both Pennsylvania and Connecticut colonies, due to conflicting land grants from the British crown. The Pennsylvanians, called “Pennamites,” arrested Bennett et. al. because they were New Englanders, that is, “Yankees,” settling on land considered to belong to their rivals. As I learned, there were wars between the two colonies’ partisans before and after the Revolution.

Interestingly, the article linked above does not mention the Forty Fort massacre, perhaps because it was considered part of the Revolutionary rather than Pennamite wars. That is a questionable notion, in that the wars were closely interrelated. As noted earlier, the Pennamites were Tories, siding with the British, and therefore doubly opposed to the “Connecticut Yankees.”

Once again, a hearty thank-you to cousin Gail Myers for feeding me this awesome document.