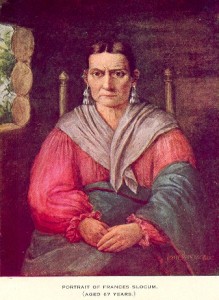 Frances Slocum was a young girl who was “stolen by the Delaware Indians from her father’s house near Wilkes-Barre, in Wyoming Valley, Luzerne county, Pa.” in the autumn of 1778.

[Picture, signed Jennie Brownscombe, from the book, Frances Slocum; The Lost Sister of Wyoming, by Martha Bennett Phelps, 1916] Note first and second names of the author. who also referred to herself as Frances Slocum’s grand-niece. More on this later.

Note the Indian earrings, contrasted with the Euro-American(?) garments. This may be the artist’s liberty, or clothes Frances’ relatives brought along for her, or maybe I just don’t know the fashions of the times, vis-a-vis Indians and Whites. I am seeking the book cited above, and another related text. But it is a famous story, with plenty of on-line references.

Frances was four or five years old when abducted. Sources disagree whether it was in September or November, 1778. Either way, it was months after the infamous massacre at nearby Forty Fort. The Slocum’s were not present at the fort, as they were Quakers, and, as pacifists, enjoyed generally good relations with the Indians (perhaps better than with the non-Quaker whites). There is also debate over exactly which tribe kidnapped her.

Frances’ father was murdered by Indians just weeks after the kidnapping. Her mother searched in vain for the rest of her life. After she died, the brothers and sister continued the quest. Finally, 59 years later, Frances Slocum, age around 63, was discovered living with the Miami tribe near Peru, Indiana. Her Indian name was Maconaquah, which translates as “little bear.” She was visited at least twice by her siblings and two nieces, one of whom was married to a Bennett.

Frances spoke little or no English, but with the help of a translator, at least one interview with her was written down by her niece, and later published.  She gave many details of her life with the Indians, her marriages to two chiefs (both then deceased), her four children and several grandchildren.

Frances’ siblings and nieces pleaded with her to come with them to “civilization,” but she adamantly refused. She had lived her life with these people, they had treated her well,  they were now “her” people, and she firmly wished to stay among them until her death, which occurred in 1847.

I will have more to say on this after I see the two books on the subject; particularly the one by Martha Bennett Phelps, eagerly seeking the connection with our approx. 4th great-grandmother, Martha Bennett, who probably was at Forty Fort during the massacre.

There are at least two public schools, a Pennsylvania state park, and other community landmarks named after after Frances Slocum. There is even an educational musical  play about her, with original native-influenced music and and at least some sensitivity to the Indian perspective.

I have avoided putting many links in the above text, because a lot of them are severely Euro-centric, characterizing  the Indians as “savages,” “heathens,” and therefore intrinsically sub-human. With that caveat, here are some 19th-century sources:

This account of the Wyoming Massacre is from an 1877 publication. Here is a modern account from the perspective of Whites in a nearby region. There are excerpts from “Biography of Frances Slocum …” by John F. Meginness (1891), including interview transcripts, at this site. In 1869 (22 years after the subject’s death), a reporter visited the Indian village where Maconaquah had lived, and wrote this in-depth article. For essays more in keeping with 21st-century sensibilities, one has to turn again to Wikipedia, on the massacre, and the person. 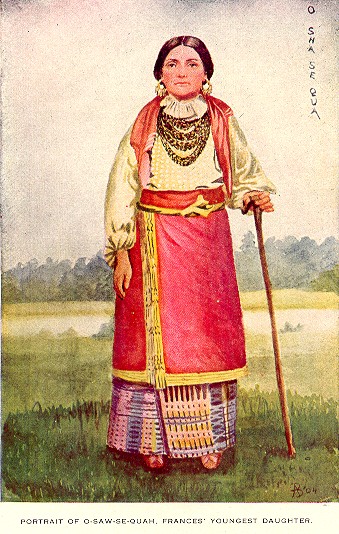