We are continuing with my mother’s story, as told to sister Bonnie and recorded in 1995. In Part I, Reatha finished 8th grade in Wibaux, Montana, in 1928. As they had every summer, Dan, Lillian, and the five girls traveled widely in the “Gospel Truck,” holding revival meetings throughout the Upper Midwest and the northern Rockies. 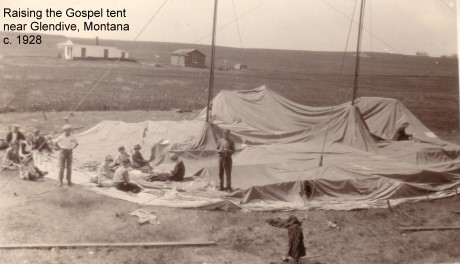 By this time, Dan had a new “Buddy Stewart” truck, which he fitted with the same primitive canvas canopy. That fall, weeks after the school term started, they settled in Miles City, where Reatha attended her freshman year of high school. Using the skills learned earlier in Dan’s “Praise Combo,” she played trumpet in the band. 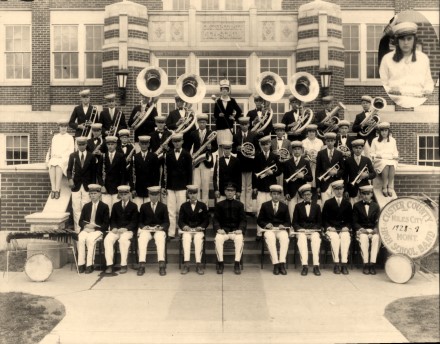 The facade of the school was still recognizable on my visit there in 2003. 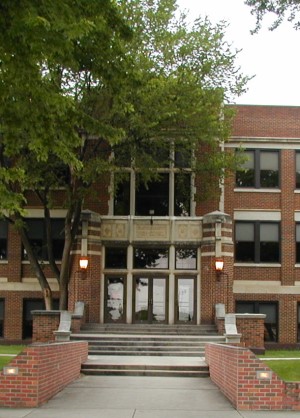 After another summer in the truck, holding meetings, and picking fruit (all the girls worked along with their parents), they settled for Reatha’s sophomore year in their westernmost locale, Ontario, Oregon. Ontario is a farming and mining community at the eastern edge of the state, across the Snake River from Payette, Idaho. Here is a rather blurry photo of Reatha’s Latin class. 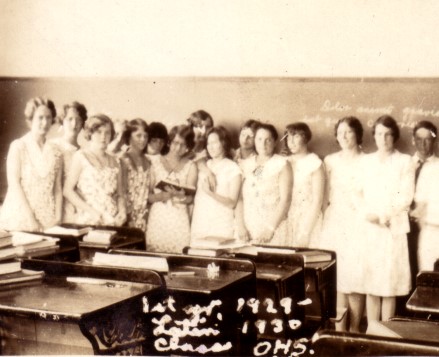 I think Mom is the in the center rear, with the wavy bangs. On the tapes, she spoke of a  “first boyfriend” named George Taylor. That may be the name of the “mystery boy” in the photo I posted in Dan Myers, part V.

For her junior year, their residence was in Marmarth, North Dakota. This fact was unknown to me until I listened to the tapes. Here is Reatha’s description of Marmarth, and of her trumpet solo at the high school junior banquet.Marmarth

Marmarth (population 140 in the 2000 census) is in the SW corner of North Dakota, on US highway 12 between Thunder Hawk and Miles City, in the midst of some spectacular badlands. Thiel and I were passing through on our 2003 “pilgrimage,” without knowing of any family connection, when I took this photo of the decrepit railway station. 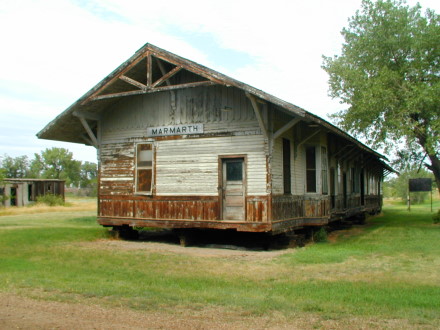 It had apparently been moved, as the railroad tracks were at least a quarter-mile away. The building had obviously seen better days (as had the town itself).

The next season (1931-32), which would have been Mom’s senior year, they returned to Thunder Hawk. Dan was employed to manage a farm near there while the owner (Karl Peterson) was visiting Sweden. Both Reatha and her sister Helen stayed out of school, because they “didn’t have enough money to graduate.”

Interestingly, nowhere on the tapes does Mother ever mention “The Depression.” As I pointed out in Dan’s story, poverty was the lifestyle of the Myers family long before the crash of 1929. Even the crop failures in the “dust bowl” years of the early 30’s are only a minor sidebar in her anecdotes.

During their stay in Thunder Hawk, Reatha worked as a live-in domestic for two consecutive families whose mother gave birth during her employment. The first family was the Petersons, for whom her father was also employed. The second was that of E.A. Mock, an acquaintance from their earlier residence there, and who later opened a long-standing car dealership in Eugene, Oregon. Another surprise to me was her dream of becoming an OB nurse. Although she did not say so, she must have been a close helper to the midwives on those two occasions, and perhaps others.