In the spring of 1932, Reatha completed her employment with the Mock family, and received her pay of $15.00. Her previous employers, the Petersons, owed her the same amount, but never paid. With part of her hard-earned “wealth,” Mom got a haircut and permanent. 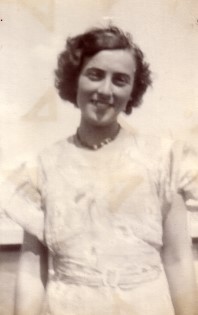 Seems pretty mild, even by 1932 standards. But apparently, Dan was scandalized. Reatha and Helen spent that summer in Frankfort, SD, with their maternal grandparents. It was the first summer they had not traveled with Dan in the “Gospel truck.” While Dan did not give the reason, Reatha thought it was because of her haircut. That fall, the family settled in Sidney. Their first week there, at a revival service, Dan announced before the congregation that Reatha was no longer welcome to participate in the services.

Of course Mother was devastated. In her own words on the tape, she “almost had a nervous breakdown.” She moved into an apartment with a friend her age, Adeline Uchitel, working as a housekeeper for her room and board while she attended her senior year of high school. Her mother visited her occasionally, when Dan was out of town.

The apartment building, converted from an old courthouse, housed a number of students whose families lived on outlying farms. Among these students were three cousins of Lovell Larson. In particular, Neva Larson, daughter of Isaac’s brother Oscar, became close friends with Mom.

Reatha graduated in the Spring of 1933, at the age of 19, along with sister Helen, who was two years older. 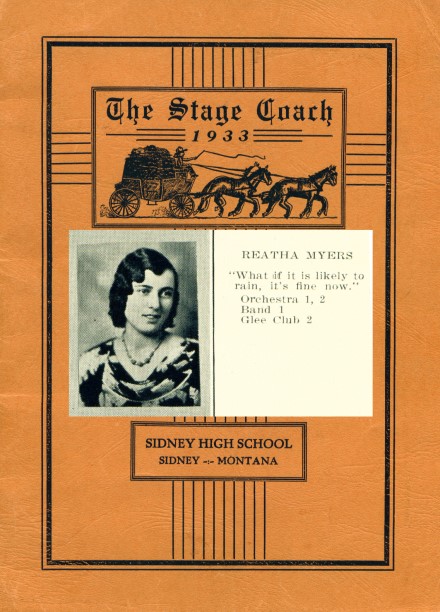 That summer, she got a job keeping house at the farm of Neva’s uncle, Walter Hart, and his wife Sadie, “a large German woman,” in Mother’s recollection. Her pay was $8.00 per month, plus room and board. The Hart farm was only a mile or so from Neva’s home, and that of her uncle Isaac Larson and his five sons. Neva was eager for Reatha to meet them, saying, “Wait ’til you see my cousins!”

Times were very hard, and crops were poor, but the Hart family was relatively well off, as Walter and his team of horses had a “good job” with the WPA. Food was plentiful as well. Reatha was especially fond of the Harts’ canned ham, a new treat for her, as Dan’s beliefs forbade the eating of pork. Mom commented, quite literally, that they lived “high on the hog.”  High on the Hog

It was not long before Mom got her chance to meet those handsome Larson boys. Her very first Sunday at the Harts’, she attended a Ladies’ Aid potluck at the home of Axel Larson, about five miles away at Squaw Gap. All the young people were curious about the “new kid” in the neighborhood. Reatha was standing with Neva when two young men approached to be introduced. One was a boy named George, who was Neva’s current heart-throb, and the other was Lovell Larson. In Mother’s own words, she and Lovell looked at each other, and “That was it.”   Meeting

Next: Courtship and Marriage