Each weekend during the summer of 1933, Reatha and Lovell spent a great deal of time together. On Sunday evenings, they drove to Sidney for the movies. North Dakota had strict blue laws at the time, forbidding any public establishment (except churches) from operating on Sundays. This was not a major factor, as Sidney in any case was the nearest town. Speaking of borders, while the Larson homesteads were all in North Dakota, the Hart farm where Reatha resided was on the Montana side.

At the theater, Reatha, because of her petite stature and appearance, was admitted on a child’s ticket ($0.05), while Lovell and their companions (often Neva and her boyfriend) paid the full price of $0.10. Lovell always had enough money for a bunch of candy bars at a nickel each.

It should be noted here that motion pictures were one of many “taboos” for Reatha’s father, so it was a new experience for Mother after her recent emancipation; one that she considered completely innocent in retrospect.

Another former taboo, which Mother embraced even more enthusiastically, was social dancing. Every other Saturday night there was a dance at the community hall in Skaar, ND. The dance hall itself was located in North Dakota, but the park next to it bordered Montana. This was significant because of Montana’s less restrictive laws. It seems that a bootlegger would come to the dances, but station his vehicle on the Montana side of the park, to “deal” illicit alcohol to the dancers. Prohibition was still in effect at the time.

Mind you, Reatha did not drink, nor smoke, ever in her life, but this anecdote was still significant to her, possibly because the bootlegger was Fred Hart, a brother of her employer, and so a cousin by marriage to all us Larsons.

On the tapes, Mother spoke fondly of her early dancing experiences. Lovell did not really like dancing, so her usual partner was Norman Amundson. He complimented her on her waltz, which she said came as naturally to her as “1-2-3.” Reatha’s passion for ballroom dancing lasted the rest of her life.

On the Fourth of July, Reatha and Lovell visited a patriotic monument at Minot, ND. They were accompanied by Uncle Walt and his future bride, Irene Nelson. Here is a composite of two photos with the monument in the background. 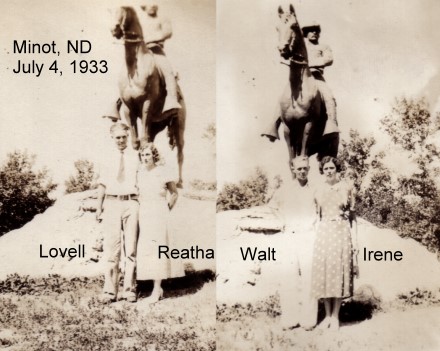 On Sundays, after dancing until the wee hours the night before, and before the evening movies, Reatha and Lovell went horseback riding. Lovell brought her a horse named Harvey, which she said was old, clumsy, and stumbled (! very different from Uncle Ivan’s description of Harvey the Horse). Mom also related that in good-natured retaliation, cousin Harvey Larson named one of his horses “Lovell.” 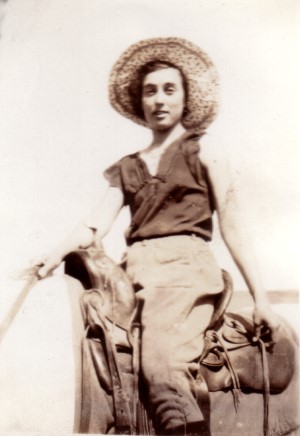 Mom was a novice at riding, but her skills improved as the summer went on. She even accompanied Lovell, and Teddy Falkvord, when they drove a herd of mustangs from the Skaar area to Wibaux, MT.1933 Mustangs

The next fall and winter, Reatha worked at the McGlenn farm. Mrs. McGlenn was a schoolteacher, who continued teaching even though she was pregnant. That must have been quite unusual in those days. Mom considered her husband rather lazy, and was somewhat scandalized that his wife had to work while pregnant. Mr. McGlenn reputedly spent his time on a nearby hill, spying on his neighbors with field glasses. All winter, Mom lived in a lean-to on the side of their house, where it was so cold, she slept wearing gloves and socks.

The following summer, Reatha got a job in Sidney, as a domestic for the manager of the local Penny’s store. On her weekends off, Lovell would bring her back to the homesteads, where they spent their days and evenings together, and Mom slept at Neva’s (what few hours she did sleep).

Next: Breaking out West