In 1934, another summer of drought and dust storms exacerbated the hardships of the Great Depression (although Mother never used the term, nor dwelt upon the tough times). Isaac Larson was forced to sell most of his cattle due to lack of fodder and the need for money. His dreams of moving the family to Washington state still had to wait, as he was now determined to stay put until the the three youngest boys finished high school, a luxury that the two elder brothers, including Lovell, had sacrificed.

Reatha and Lovell, however, pulled up stakes and headed for the Pacific Northwest. They traveled in a 1928 Chevy that Dad had swapped for some horses, and had altered the interior so the seat would fold down for sleeping. An small exterior trunk carried all their possessions. It must have looked something like the car pictured below. 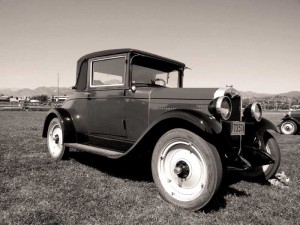 Almost as a sidelight, Mom mentioned that they got married at the courthouse in Miles City “on the way out.” It was a long journey, across the plains and over the mountains, on mostly unpaved roads. They slept in the car alongside the road, as did many other impoverished pilgrims they met along the way (think “The Grapes of Wrath,” a story set in the same time period).

They first went to Portland, Oregon, where Lovell found work through an employment agency, but stayed there only a short time. They then proceeded to Longview, Washington, where Mom’s close friend Dorothy and her husband Albert Bergquist had recently settled. Dad was soon working at the Long-Bell sawmill, at that time the world’s largest lumber mill. The timber industry was one of the most active at this time, while many other industries nationwide were still reeling from the Depression. Once settled in Longview, they took the time to be photographed in their “wedding clothes.” 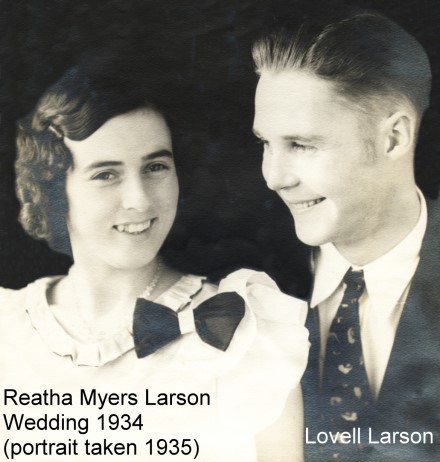 The housing for mill workers consisted of tiny clapboard cabins near the mills. Lovell and Reatha first lived in one of these shacks on 10th Avenue, and a few months later, moved to another one on 17th. Neither of the two dwellings had indoor plumbing; sanitary facilities consisted of an outhouse in the tiny back yard. 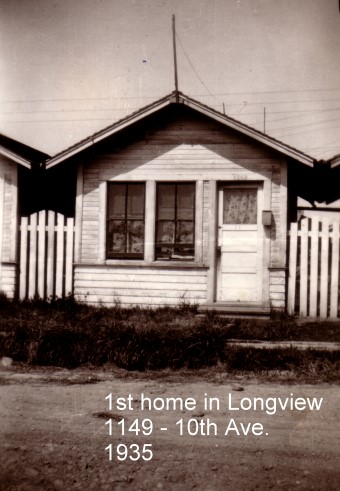 As the birth of sister Darlene drew near, the mill workers went on strike. The rent for their cabin ($4.75 per month) was waived during the action. They had little furniture but cots to sleep on. They frequented soup kitchens, scraped together enough change for peanut butter at two pounds for a quarter, or ate at their friends’ who were working at other jobs. Walking was their only mode of travel, as there was no money for gasoline. When Lovell walked the picket line, the union provided sandwiches, which he brought home to share with Reatha.

On July 9, 1935, Darlene was born in the county hospital. Dad was “tickled” that their first child was a girl, having grown up with only four brothers and a widower father. Mother may have been less partial, having been raised mostly with her four sisters, and a usually absent brother.

The next day, July 10, the strike ended. Lovell returned to work, at the newly raised wage of $0.50 per hour. Life was good.