Several months ago, I was contacted by Jody Boyd, a member of the Monona County (Iowa) Genealogical society. Each member of the society was assigned a “cold case,” that is, an individual in the county, long-deceased and not related to the member, to research and build a family history.

Jody’s assignment was Harry Eugene Colby (1822-1903), a long-time resident and businessman in the town of Onawa. As Jody discovered early in her research, H. E. Colby happens to by my great-great grandfather (Dan Myers’ maternal grandfather). So, for the past six months, Jody and I, and cousin Gail Myers, have carried on a lively correspondence, and exchanged a great deal of information. I must admit that much more info flowed from Jody to me than in the opposite direction. For this I am nominating her an honorary cousin.

Jody’s report is now complete, and it is impressive indeed. Just for starters, here are the tombstones of Mr. and Mrs. Colby: 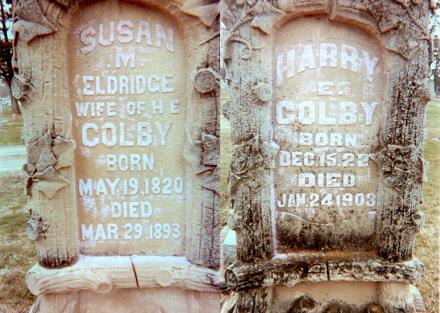 For my part, I had already assembled an extensive pedigree for Harry Colby, dating back to to the pilgrims, and indeed into ancient history. My info on his descendants, other than my immediate family and a few Myers cousins, was a lot more sketchy. Jody’s work has identified literally dozens of cousins among the Colby’s about whom I knew nothing whatsoever. Also included in the file are biographies of Harry and two sons, from a recent historical publication, and his obituary from the local newspaper upon his death in 1903:

Onawa, IA Jan. 27: The death of Mr. H. E. Colby, Sr. a highly esteemed citizen of Onawa, which occurred on Saturday evening, removes one of Monona County’s pioneers. For nearly 50 years Mr. Colby had been a citizen of Monona County having settled here with his wife as early as the spring of 1855 coming from the town of St. Charles, Kane Co., IL.

Mr. Colby was a native of New York and was born in 1822. In early life he engaged in the mercantile business in that state, and followed that until locating in this county. Mrs. Colby died a number of years ago. Three children yet survive, Mrs. Stephen Myers and Frank E. and Harry E. Colby.

Mr Colby during his life filled various public offices in Monona County and for several terms was elected a member of the board of supervisors in which capacity he proved one of the best and most efficient in the attention given to county affairs. At one time he devoted himself to farming and lived in Franklin twp, but in later time he and his son Frank were engaged in business. Mr. Colby retired from active affairs about 10 years ago since which time he has led a quiet life. He was a man possessed of splendid qualities as a citizen, hospitable, straight forward in manner and always above reproach. He was ill but a few days having contracted a sever cold, followed by weakness of the heart from which he failed to rally owing to his advanced age. Funeral services were held at the late family residence and the remains interred in the private plot in the Onawa cemetery this afternoon.

As for Susan M. Eldridge, I previously had nothing but her name, and an old photograph from my mother’s collection. 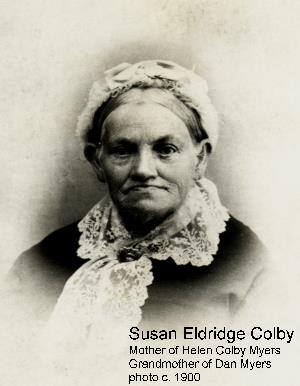 Oops, I will have to revise the estimated date of the photo, since she died in 1893. Jody provided not only her precise birth and death dates from the tombstone, but also her obituary, from the Monona County Democrat, March 30, 1893: 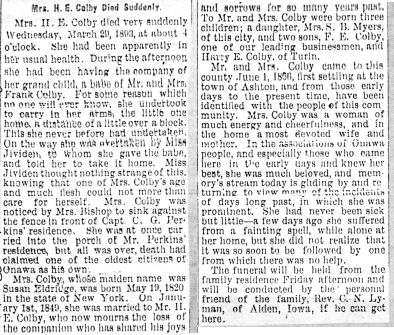 Better yet, Jody found somewhere the names of Susan’s parents: Gardner Eldridge, and Permelia (sic). That is most exciting to me, as I had been searching in vain for those names for a very long time. If I can verify this, I think I can trace her heritage back several more generations, and even tie her in as an approximately sixth cousin of her husband! Stay tuned for that. Meanwhile, a thousand thanks to “cousin” Jody. Next: Helen and Stephen Myers.