Following up the previous post (on Harry E. and Susan Colby), let us tap into the recent work of Jody Boyd, adding it to information I have previously assembled, to form a brief sketch of my great-grandparents Myers.

The portrait below is from my mother’s collection. I first posted it in The MeMe Tapes series, along with a touching audio clip in which Mother recalls meeting them, and playing with her Grandpa, when she was only three years old. She also related that Helen was a midwife, and that they came to help with the birthing of Mom’s next younger sister, Velma. 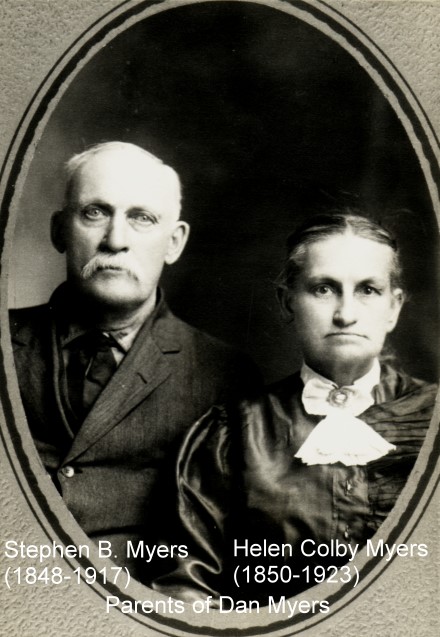 Helen was the eldest child of Jody’s “cold-case” subject, Harry Eugene Colby. Here is her obituary:

–
Her Remains Were Brought Here and Funeral Services Held Last Friday – She Was one of the First Settlers of Onawa and was Honored by a Host of Friends.
–

When but a small child she came with her parents, Mr. and Mrs. Harry E. Colby, Sr., to Monona County, in the year 1856. This part of the country was very wild at that time. She was the oldest child of the family and knew something of the hardships that the early settlers were called upon to endure in that early day. She was here before the town of Onawa existed. She saw it grow from its infancy to its present size. It was here that she grew to womanhood and was educated. She taught school in Monona County for six years and one year in Harrison County.

On September 15, 1875 she was married to Mr. Stephen B. Myers at Onawa, Iowa. Mr. Myers was in the Treasurer’s office for six years and was for years a skilled accountant for several counties. Mr. Myers died August 17, 1917. This was a long and happy union, broken only by the death of the husband about six years ago. They walked down life’s pathway together for more than forty-one years. Mrs. Helen C. Myers left Onawa on December 16 1921 and resided in Utah until the time of her death. She had been under the doctor’s care for some months, but was not thought to be serious. She was up for a while last Sunday, and quietly passed away early Monday morning. Just peacefully went to sleep.

Seven children were born to this union, one dying in infancy and Eugene who served in the Spanish-American War, died in 1912. The living are, Clarence [sic. – actually Lawrence] of Clark S.D., Dan of Zion City Ill., Henry of Kenilworth Utah, Frank of Oakland, Cal., and Lenora B. Splatt of Reno, Nevada. The deceased also leaves two brothers, Frank E. Colby of Sioux City and Harry Colby of Onawa Iowa.

Funeral services were conducted from Park Hotel on Friday afternoon March 16, at 2:30 p.m. in charge of Rev. C.S. Klackner of the Onawa Christian Church and the body was laid to rest in the Onawa cemetery.

Here is a composite photo of the gravestones. 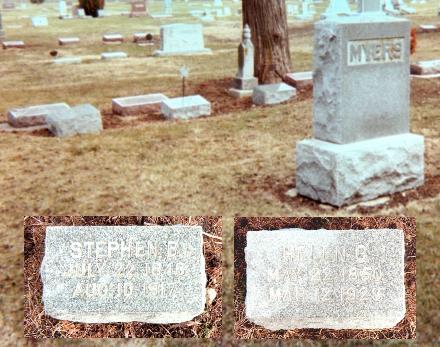 The obituary of Stephen Myers contains a fascinating, previously unknown story, which we will explore in the next post.

The couple’s seven children are: