Here is a photo I found on findagrave.com. 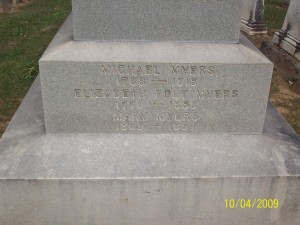 Its location is Mt. Olivet cemetery, Frederick, MD, in which also lies the grave of Francis Scott Key, writer of “The Star-Spangled Banner.”

It is a long-shot, but I am investigating the possibility this might be Philip Myers’ brother. According to cousin Paula, Michael Myers (brother of Philip) is the great-great grandfather of Dr. Charles Myers, author of  “A Connecticut Yankee in Penn’s Woods: the Life and Times of Thomas Bennet.” Michael Myers is not my direct ancestor, but I am keenly interested in finding anything out I can about him, in hopes it may lead to his (and Philip’s) parents, who purportedly immigrated from Germany, and settled in Frederick, MD in the 1760’s, but who are otherwise a total mystery, including even their names.

Michael himself is almost as vague; all I have from Paula is his name – no spouse, dates, or residence history. Also on Internet genealogy sites, his name appears (as the father of Madison Myers) with no other information. No Michael Myers is listed bearing the vital information shown on the gravestone above.

The “gravestone Michael’s” birth date is in the ball park, but so far, no other indication or counter-indication, other than geography. Incidentally, I found the marriage record of this couple (6 Oct. 1792) in a printed source, Marriage Licenses of Frederick County 1778-1810 by Margaret E. Myers(!). Despite the author’s name, this is no real help in connecting or disconnecting the gravestone with the brother of my fourth great-grandfather.

The monument in the photo looks relatively new, indicating some interest on the part of their descendants, whom I am trying to identify, locate, and contact.

Information relating to the family’s immigration from Germany is very sketchy and somewhat contradictory – e.g., the purported year of their journey, 1760, falls in the middle of the Seven Years’ War (called the “French & Indian War” in the US). During these years, European immigration to the New World was at a virtual standstill. 1766, the alternative given by at least one printed source, is more likely historically, but without the father’s name, I am pretty much grasping at straws.

Anecdotally, distant cousin Harry Myers, of Port Clinton, Ohio, told me that Philip’s family first arrived in Philadelphia, before settling in Maryland. He did not know the source of that tidbit. If true, it is helpful, as surviving immigrant lists are fairly extensive for Philly, although far from complete. They are all consolidated in the book, Pennsylvania German Pioneers … 1727-1808, by Ralph Strassburger. As already mentioned, the Seven Years’ War pretty much interrupted the flow. Out of a total 324 ships listed between 1727 and 1775 carrying German immigrants to Philadelphia, only one is shown between 1756 and 1763. Of course, cousin Harry may have been incorrect; Philip and family may have sailed directly to Maryland colony. Passenger lists for Maryland arrivals during any of  the 18th century are nonexistent, as far as I currently know. But we can assume that there was a similar dearth of arrivals there during the Seven Years’ (aka French & Indian) War.

At least I think we can. It occurred to me that other ports, such as Baltimore, may have been less affected by the fighting than was Philadelphia. But it looks like the war in Europe was equally responsible. The page I had copied from Eighteenth Century register of emigrants from Southwest Germany by Werner Hacker, contains almost 120 names (all with the surname Mayer – that is how this book spells Myers). Of the 120, only one emigrated during the war years.

And so, the search continues. Stay tuned.

Stephen Bennett Myers, Part III
The Mail Must Go Through