The Mail Must Go Through

This is a stitch! In the summer of 1979, my mother, the late Reatha “MeMe” Larson, visited Norway with my Uncle Vernon and Aunt Audrey Larson, also both deceased. She mailed the postcard below to her sister, Esther, in Longview. 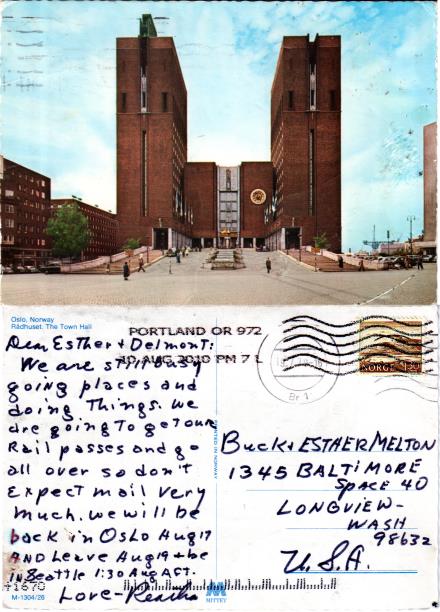 Nothing too remarkable about the card, except for the postmarks: Norway, some date in 1979, and Portland, Oregon, 10 Aug. 2010. It was then delivered to the Baltimore St. address, 31 years after it was mailed from Norway! Of course in the meantime, Uncle Buck has passed away, and Aunt Esther has moved her residence a half-dozen times. Esther received the postcard from the current resident, and loaned it to me to scan for the archives.

Every so often you hear about this kind of thing, but this is the first time I have been so closely involved. Send in the post-office jokes!