In the previous post, I told of  my acquisition of four laying hens, and my ruminations over the prospect of butchering them for the stew-pot when they get too old to lay eggs. As I was steeling my resolve,  I began to notice ads for free roosters. It seems that some backyard chicken-raisers would rather give away their surplus roosters than butcher them. The prospect of free meat, not just free of cost, but cage-free, pastured poultry, was appealing, to say the least. When an ad appeared for six young, full-sized roosters, I could no longer resist. I rigged up a temporary holding pen of straw bales, a tarp, and chicken wire, and that night, filled it with the six doomed birds. I left a phone message for my friend Kevin, an experienced home butcher, asking if he would help me with my first butchering project.

The next morning around 6:45, there began a chorus of cock-a-doodles and doodle-doo’s that was loud and continuous. I don’t know if all six were crowing, or if it was only two or three, but it didn’t let up for the next 15-20 minutes. After that, they would be silent for varying periods, then unleash another barrage.

Now, 6:45 on Saturday morning is not so early for me; I was already on my second cup of coffee. But I couldn’t get my mind off the neighbors. Were they cursing the unknown jerk who brought the creatures into their neighborhood? Were they gathering in secret to storm my garden? This is the city, for God’s sake. Mercifully, Kevin called me later in the morning. He agreed to help me butcher the chickens at his place, that afternoon.

Before noon, my wife, Thiel, had to leave. I was nervous about boxing the roosters for transport by myself, so decided to do it a little early, with her help. She followed me to the holding pen. I unfastened one corner of the wire, climbed inside, and with some difficulty caught the first bird. I placed it in a cardboard box outside the enclosure. Thiel held the box shut while I turned back to catch the next one.

That was when things got hairy. While we were busy, the remaining chickens had squeezed between the front of the bales and the wire, which it turns out was not fastened securely enough. All five of them were pushing slowly, single-file, through a 4-foot tunnel toward freedom. It was like a big, squirming conga line. Thiel moved to try and stop them, which allowed the boxed rooster to escape. Before Thiel could halt the tunnel traffic, the first bird in line had made it out.

We managed to get the four remaining captives back into the enclosure and better secure the wire. I captured one of the escapees with a fishing net, but the other one had flown from the garden enclosure, something the hens (whom I occasionally release from the “tractor”) had never even attempted.

Thiel left for her appointment, and I was on my own. Net in hand, I chased the vagrant around the neighborhood for an hour, never getting closer than about 30 feet, before deciding that approach was hopeless. With an improved enclosure and a better technique (I remembered that you catch them by the feet, not the body), I got the five roosters into two boxes to haul to Kevin’s farm.

The butchering itself was uneventful. Kevin and two other friends did most of the work, while making sure I performed each step at least once under their supervision. In less than an hour, all five birds were freezer-ready, and I knew first-hand how it was done.

Before dark that evening, I walked the neighborhood hoping to catch a glimpse of the lost rooster, or to hear him crow. Nothing. The next morning, I was outdoors early, in hopes he would begin crowing at first twilight (as they all had done the day before), while it was still dark enough to approach and catch him. Nothing. Oh well, maybe a skunk, raccoon, or coyote had made a meal of him during the night. Easy come, easy go, and at least the neighborhood was quiet again.

But oh, no, after it was fully light, the crowing began. He crowed three or four times over the space of about a minute, was silent for several minutes, then repeated the cycle. This made it easy to locate him, in a tiny wooded area right next to a neighbor’s house. He was in the low branches of a juniper tree, but when I approached within 30 feet, he became extremely nervous. It was obvious that if I came any closer, he would fly out into the open, or higher up in the tree. I gave up any hope of catching him in broad daylight, walking away from him still in the tree. The intermittent crowing continued until mid-morning, then stopped.

That afternoon, an acquaintance from church, who had somehow found out about my hens, telephoned to ask if any of my birds were missing. She had come home, a good quarter-mile from my house (across a busy street), to find the rooster in her backyard, scratching around under a bird feeder. I rushed over with my net, sneaked quietly around the house, but as I feared, at the first glimpse of me from across the yard, he bolted out of there, into a large, overgrown pasture. My friend said maybe he would find his way home, but I had my doubts. I took another walk before dark, listening again, but apparently roosters mostly crow during the morning hours.

To my surprise, the bird did find his way back to the previous night’s roosting area, where he again began crowing, well after daylight. All morning, I monitored his crowing, which seemed to move around only a little. My plan took shape. After it was fully dark, I came with a light, locating him in the very same tree, knowing that he would be virtually helpless in the dark. With Thiel’s help, the fugitive was captured, with a lot of squawking but no apparent injury. The peace of the neighborhood was restored, but now I had another butchering job on my hands.

I set things up in the backyard the next morning, and plunged(!) into the project all by myself. It took me a full hour, during which I definitely broke a sweat, but the results were acceptable, with no mishaps worse than a shallow finger cut.  Two days, later, we cooked the bird, and if I do say so myself, he was delicious. Not quite as tender as a cage-raised, commercial fryer, but incomparably tastier, and far less fatty. All’s well that ends well (for us, not for the chicken). Chicken-killing is not something I would want to do every day, or even every week, but I may try my luck again in next year’s “free rooster season.” The image below is from backyardchickens.com. 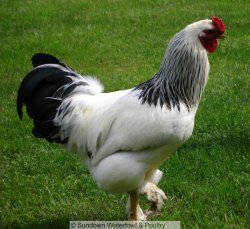 Similar to my lost & found rooster

Next: forward into the past (back to genealogy).