First, let me make the genealogy connection, weak though it may be. When I was a child, my parents kept banty chickens, mainly for their eggs. As Mother fried them, she would observe, “Look how those yolks stand up and salute,” a humorous compliment she probably learned from her parents. Even so, she must have been contrasting them with eggs from the 1950’s supermarket. Our eggs were small, but very tasty, as I remember.

Of course, as a side project, Dad also butchered chickens for eating; both “stewing hens” (past their laying age), and “fryers” (surplus young roosters). I am not too clear on the details, but I think they normally took the birds to my grandfather’s house, about a mile away. Grandpa Larson also butchered his own chickens to sell to neighbors. Sister Bonnie and several cousins have commented on these memories. I remember some of the killing sessions, also the pedal-powered sharpening stone Grandpa used to sharpen his hatchet and probably his butchering knives as well. We children were not required to do any of the work; I mainly remember the chickens literally “running around with their heads cut off.”

Now, 63 years old myself, I have plunged into backyard chicken culture. First it was the coop and the hens. I was tired of caged-chicken eggs, and craved the “real thing” of my childhood memories. The recent Salmonella scare was also a consideration. I began “stalking” Craigslist in the farm-and-garden section. Before long, I bought a used “chicken tractor” from one seller, and four young hens from another. Chicken Tractors are all the rage. Just Google the term to see what I mean. 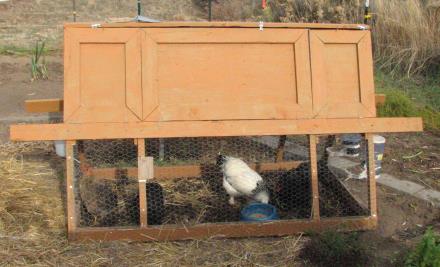 After a couple of weeks, the first hen started laying. Even before then, though, I started thinking toward the future. Hopefully, all four hens will be laying soon, but in two years or so, they will stop again due to “old age.” What then? The obvious answer: stewed chicken and dumplings, another favorite food of my childhood. Also obvious: the need to kill and butcher the birds in that event. So, I began reading up on backyard chicken butchering. There are a lot of “how-to’s” on the web, and it didn’t look too hard. Not pleasant, mind you, but I could hardly continue to eat meat in good conscience, if I could not stand up to the reality of the pasture-to-plate transition. I resolved that when the time came, I would be prepared to do the deed. As luck would have it, things happened much faster.

Next: The Renegade Rooster