On 1 June 1793, Michael Myers purchased from Christian Shriock a small parcel (1.75 acres) of a tract of land called “Lisbon.” Two years later, he purchased an adjoining 94 acres. This land lay along the wagon road between Frederick Town and Creager’s Town, which was also the main road connecting the German settlements in Pennsylvania with those in Virginia and Carolina. Indeed, parties of Germans had been passing through western Maryland long before they began their first settlement there in 1729.

That first German settlement, named Monocacy (same as the nearby river), was razed in an Indian raid during the French-Indian War, and the village of Creager’s Town was platted on an adjacent site afterward. By Revolutionary times, the area was occupied by a great many German-Americans, including the family of young Philip Myers, his parents(?) and siblings.

Other than “along the wagon road,” I have been unable to pinpoint the exact location of Lisbon, although I do have a surveyors description and diagram of its boundaries, dated 1761. 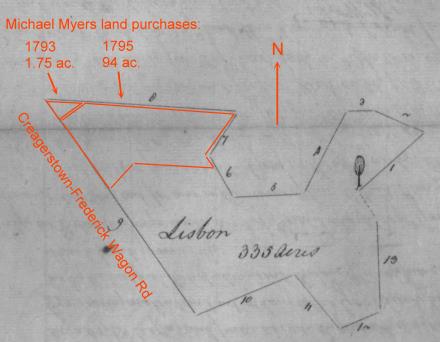 I drew the boundaries of Michael’s parcels myself from the surveyor’s descriptions, as no diagrams were provided. The course of the road was not given, except that it touches some or all of the western boundary of Michael’s lots.

So, what evidence is there that this is the same Michael Myers who bought and sold a lot in Woods Town in 1790-91? Not much, but there are a couple of indicators. First, the geography and timing is good. This land is only a few miles from Woods Town, and Michael may well have rented it for a couple of years before he bought the first parcel.

Second, when Michael sold his town lot, the document identified him as a blacksmith. “So what?” you may ask. The 1793 and 1795 documents say nothing about his occupation. But remember the newspaper item in the (Frederick) Maryland Gazette dated 22 Nov. 1797: “Michael Myers, 2 miles from Creager’s Town, Hunting Creek, Fred. co., selling waggons [sic] of all dimensions.” The skills of a blacksmith would be essential for a wagon-builder in those days.

“Hunting Creek” posed a bit of a problem. A list of streams in Maryland turned up none with that name. Finally, with the help of my “Random Acts” angel, Mike Pierce, I found it, arising in the mountains west of Thurmont, running through that town, then to the south. It crosses “Old Frederick Road” about two miles south of Creagerstown, the very location where the paper said Michael was selling wagons.  Here is where the Old Frederick Road crosses Hunting Creek. The image is about one mile wide. 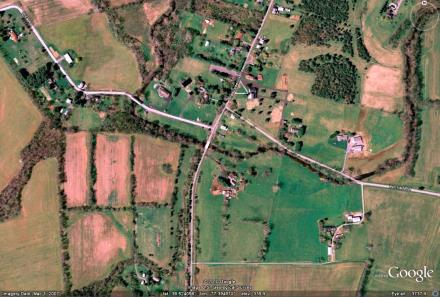 Oh, and there is one more vital event in this time period: the marriage of Michael Myers and Elizabeth Fout on 06 Oct. 1792. One comment to my post about the gravestone said that they were the parents of Madison Myers, who married Harriet Myers, his cousin (daughter of Philip Myers). If Madison’s parents’ names can both be verified, it would prove that the “gravestone Michael” is Philip’s brother.

But is the buyer of this land at “Lisbon” also the “gravestone Michael?” More probing is needed. Maybe some of the later land transactions will shed some light.