Once again, Mike Pierce has made my day. Not only has he held my hand through the labyrinth of MDLandrec.net; now Mike has steered me back to the old reliable US census. Duh. There is now proof positive that the “blacksmith of Myers Ford” (as I have nicknamed him) is indeed the husband of Elizabeth Fout, and so he is the “gravestone” Michael, and, by anecdote at least, brother of Philip and Lawrence Myers.

Mike pointed out that in the 1850 census, in the Creagerstown district of Frederick County, MD, an Elizabeth Myers, age 77, was counted as head of a household. This age puts her *close* to the birth date of 1770 given on the gravestone for Elizabeth Fout Myers. Also in the household is Mary Myers, age 48, listed on the stone with birth date of 1803. Only one year off in the case of Mary, three years for elderly Elizabeth; there can be little doubt these are the ones. The 1850 census was the first to include names of all household members, instead of only the head of each household. But I tracked the census entries back through 1840, 30, 20, 10, and 1800, and the numbers per age bracket match up pretty well. More on the census data in a moment.

To further cement the connection, Mike found a land sale on MDLandrec.net that ties it all together. As usual, click on the image to enlarge. 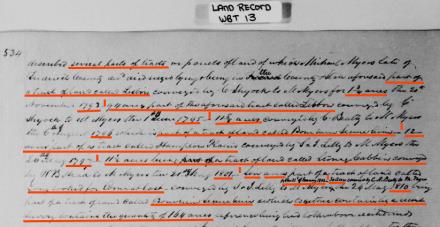 This deed was issued to George Layman, who bought the land from Mary Myers on 30 Aug. 1851, for a price of $468. The description includes exactly the seven parcels that Michael purchased between 1793 and 1810! Mary, you may recall, is included on the aforementioned gravestone. Besides cementing the relationships, the deed is encouraging to me personally; it indicates that I found all of the correct land transactions, and no spurious ones.

But the censuses (censi?) also reveal something I was wishfully thinking was not the case: the family owned slaves 🙁 To be specific, one (plus one “free Negro”) in 1800, two in 1810, three (plus one “free Negro”) in 1820, a high of six in 1830 (remember, the farm and business were now being managed by a widow and adult daughter, who were also apparently supporting an orphan girl), five in 1840 and 1850. I’ll have to cede the moral high ground on that one.

The next problem (I’m hoping not too hard) is to tie the 1810-1830 census data, which show a boy of the right age bracket, to Madison F (Fout?) Myers, who removed to Pennsylvania, and married his cousin Harriet Myers. If that is successful, it will lead back to a harder job, one that I have been “on” for some time: to identify the father (and/or mother) of Philip, Lawrence, Michael, and Henry Myers.