This individual is the link connecting the Pennsylvania Myers’ with the Maryland branch. 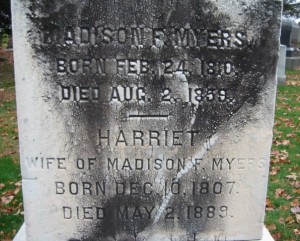 Madison F. Myers was born in Maryland, and removed to the Wyoming Valley (PA), where he married Harriet Myers, daughter of Philip Myers, and also his cousin, according to Genealogical and Family History of Wyoming and Lackawanna Valleys … Therefore, Madison’s father must be Philip’s brother.

My first post about Michael Myers’ gravestone drew a comment to the effect that Madison F. (Fout) Myers was indeed the son of that particular Michael Myers and Elizabeth Fout. Although I have yet to document this from an authoritative source, circumstantial evidence continues to accumulate. As today’s example, note the first and second name of Madison and Harriet’s first child: 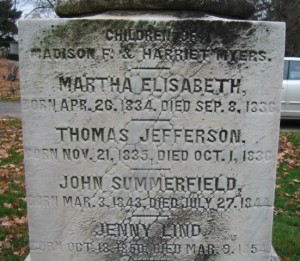 Martha, the name of Harriet’s mother, and Elisabeth (Madison’s mother). It appears that the rest of the children were named not after ancestors, but prominent public figures, including Jenny Lind, the Swedish opera star who made her famous tour of the U.S. in 1850, the year of the fourth child’s birth. Of course, Thomas Jefferson was also the given name of Madison’s brother, who lived out his life in Maryland.

Besides these four, who all died in early childhood, there were at least two other children, Frederick Benham Myers (also buried at Forty Fort), and William Penn Myers, whose name I found as a co-plaintiff with brother Franklin, in a lawsuit in 1889. 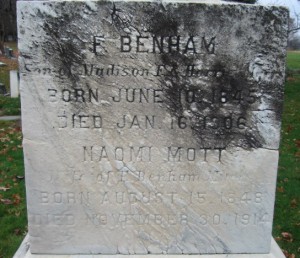 By the way, F. Benham Myers, as his tombstone is inscribed, was the grandfather of Dr. Charles E. Myers, author of a relatively recent (1993), popular history of the Wyoming valley, presented as the biography of a leading pioneer there, our common ancestor Thomas Bennet.

More on this thread as it can be uncovered.

He's the One (Michael Myers, part 6)
How Do You Spell That, Again?