I have written many posts about the Wyoming Valley of Pennsylvania, home of my fourth great-grandpa Philip Myers and grandma Martha Bennet Myers. The articles tended to emphasize sources I discovered first, not necessarily what was written first. To illustrate Martha’s importance as a primary source, I now refer you to three of the earliest published accounts of this interesting history.

A big problem with the early literature is its extreme bias toward the Eurocentric (one might even say bigoted) perspective on the conflicts between Native Americans and European settlers. I can only shake my head, hold my nose, and make use of what facts I can find. But I digress.

The earliest such work is History of Wyoming, in a series of letters, from Charles Miner, to his son William Penn Miner. Philadelphia; J. Crissy, 1845. Charles Miner (1780-1865) was a prominent journalist and politician from Luzerne County.

The second is Wyoming; its History, Stirring Incidents, and Romantic Adventures (!), by George Peck, D.D. New York; Harper Brothers, 1858. According to the author, although published later than Miner’s history, it is based on even earlier interviews (1841) with Martha Myers. The Rev. Dr. Peck (1797-1876) was a Methodist minister of some note (as were all four of his brothers).  He no doubt enjoyed special access to Martha Bennett Myers, because (although it is not mentioned in the book) he was married to the Myers’ daughter, Mary. Rev. and Mrs. Peck were also grandparents of author Stephen Crane.

Both of these sources are available, free and complete, online at Google Books. Just click on the underlined titles above. Peck devotes a full chapter, nearly 70 pages, to his conversations with Mrs. Myers. Both authors emphasize her clear mind and cordial nature, despite old age and blindness. This is what Charles Miner had to say about their conversation: 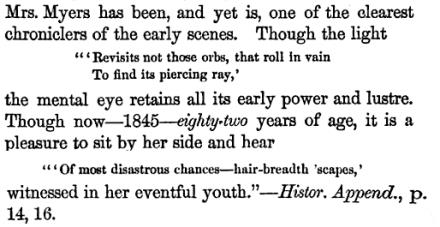 In his Pictorial Field-Book of the Revolution (1851) – also available on Google Books – Benson J. Lossing writes,

It seems that we owe much of our knowledge of Philip and Lawrence Myers – including, I believe, the very existence of the two other brothers, Michael and Henry – to the “clear memory” and “mental vigor” of the elderly Martha Bennett Myers. 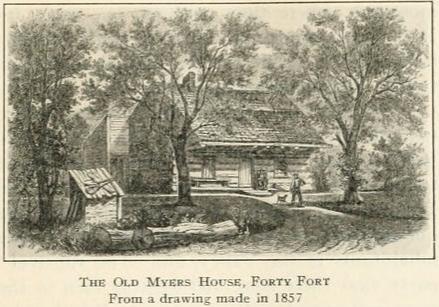 How Do You Spell That, Again?
Michael Myers Wrap-up